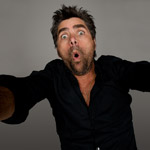 We all know John Stamos is capable of playing “sexy” (the man has somehow turned Greek yogurt into an aphrodisiac—have mercy), but how many times have we seen him portray a high school kid on the edge of delinquency? When renowned New York-based photographer Howard Schatz set out to create his 20th tome, Caught In The Act: Actors Acting (an extension of his popular “In Character” item for Vanity Fair), he hoped to capture a slew of Hollywood’s elite doing what they do best in a stripped down, vulnerable state. And the finished product is delightful.

At least three snapshots are devoted to each actor, often more, with every image depicting a scenario that had been pre-determined by Schatz and his co-author, writer Owen Edwards: John Goodman “greeting a bunch of little trick-or-treaters at the door in a way you figure they’ll never forget;” Ken Jeong as “a gymnastics coach from China screaming at a nine-year-old who just fell off the balance beam.” Giving the actors specific characters to play was what enhanced Schatz’s vision for the book. “If you make soup and add a funny ingredient, you change its taste. I found that I could make different photos of the same person simply by adding an adjective,” he said. “Working with actors, who use their bodies and imaginations to make somebody up from another place, world or time—it fascinated me.”

And lest you think this is simply a book of pictures, each gallery is prefaced by an intimate interview, all of which were conducted by Schatz himself. “There were two or three million words of interviews,” he said. “I talked with every actor about ideas and work, about creativity and imagination, about how they come to characters.”

Click through the gallery below for a sampling from Schatz’s new book, out October 20th from Glitterati Incorporated.

All photographs by Howard Schatz