Home Uncategorized Catching up with Franz Ferdinand Before they Breeze Through L.A. 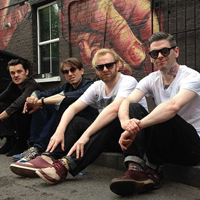 After a four-year disappearing act, Franz Ferdinand burst back onto the scene last year with Right Thoughts, Right Words, Right Action. (Their intimate set last July at the Echoplex was a knockout) Having cranked out three albums in five years, which earned them a slew of Grammy nominations, a double platinum single, and a packed live schedule, it’s no wonder they needed a break. Following last year’s turn on the festival circuit, the Scottish post-punk quartet will return to Los Angeles tomorrow night with a gig at the Wiltern. Before the band hopped on a plane from Glasgow to the States, we caught up with bassist Bob Hardy about what it’s like to breathe new life into a band heading into its 13th year together.

What was different in the recording process for Right Thoughts?
We wanted the record to have an energy that we thought had been missing from some of the recordings we’d made previously. We came up with a rule where we’d go into the studio for seven days, 10 at the most, to work on two or three songs, then have a break to do so more writing and arranging. We’d record in batches.

That’s not how you approached the first three albums?
In the past, we’ve locked ourselves away in the studio for an indefinite period of time and said, “OK, we’ll come out when we’ve finished the whole album.” This time around, we wanted to get away from that. It can be quite bad and it’s a lot of pressure. We wanted to maintain the energy.

So the key to maintaining that energy was limiting yourselves, doing less to do more?
Definitely. Everything was very fresh. We knew what we were doing because in the week before, we’d already worked out the song, all the parts, how it was going to be arranged. When we got into the studio, we could really concentrate on performance, which we hope comes across in the record. We didn’t want to write and record simultaneously again. It made it a much more fun process for us, as well.

How does a band that’s been together for over a decade reinvent itself?
I think one of the key things is keeping the dynamic within the band fresh. A big part of that was taking a break after our third album. We went our separate ways for a few months and didn’t really hang out or see each other very often. We all got back together when we were ready to perform and were excited about it again. That was key for this album. When we did start writing, we felt refreshed. It felt more like a hobby than what we do for a living.

That’s especially important when bands are formed out of friendships, like Franz Ferdinand was.
That’s the whole reason you start a band. It’s fun. You’re with your pals. Then you press on in your career, and you record, and you tour, and you can forget the reasons you got in it in the first place.

What has the reception been like for the latest tour? The last time your were in L.A., at the Fonda with Palma Violets, the crowd seemed to respond well.
That was a great gig! We really enjoyed that one. We’re just happy to be on the road, playing an album that we’re all so happy with. The new stuff fits in with the old stuff on stage. There’s a nice dynamic to it.

The Story Behind L.A. Band Jawbreaker’s Return to Stage for ‘Dear You’