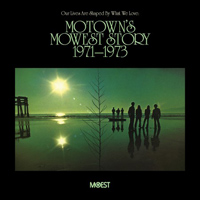 The Backstory
Two great cultural forces from the freezing Midwest, Detroit’s Motown Records and Chicago’s Soul Train, decided to relocate to sunny Los Angeles in what Hunter Thompson called “this foul year of Our Lord, 1971.” Oddly, it was Don Cornelius’ budget dance show and not Berry Gordy’s multimillion-dollar “Sound of Young America” that made the smoother transition. In the previous decade, Motown had amassed a jaw-dropping 110 Top 10 hit singles, making it the most-successful black-owned company in the country. Motown was also coming off a series of transitional chart successes that were bridging a gap from the charm-school soul of the 1960s to the gritty, socially aware funk of ’70s.

Even though the label had had a presence in Los Angeles since 1963, Gordy’s decision to go west was bound to be controversial. (Smokey Robinson initially refused to move because of his fear of earthquakes.) The multitude of factors involved—Gordy’s painful breakup with diva Diana Ross, the Detroit race riots of 1967, the debilitating departure of Motown’s prize songwriting trifecta Holland-Dozier-Holland—paled in comparison to Gordy’s obsession with expanding into film and television. Gordy launched subsidiary MoWest Records as a testing ground for eventually replanting the entire Motown operation. He spared no expense, opening a two-story state-of-the-art studio complex on Romaine Street in Hollywood near Motown’s main offices at Sunset and Vine; it boasted an atrium and an al fresco conference room on the roof. He even carted in parts of Motown’s famous Studio A (a.k.a, “the Snake Pit”) in an attempt to recreate Hitsville’s classic sound.

Why You Should Listen
“MoWest will be used to expand Motown’s musical horizons,” announced Billboardupon the label’s debut. David Pell, a respected jazz saxophonist whom Gordy had hired to oversee talent signing, took this literally; one of the label’s first singles was a six-minute novelty hit that combined a treacly Burt Bacharach cover with sound bites of assassinated U.S. political leaders. MoWest’s oddball output—NPR’s Oliver Wang called it “less geographical than experimental”—would be among the factors that would kill the label off two years later. But oh, what a bevy of forgotten Left Coast esoterica from the days of pukka shells and hanging terrariums it plays like. (Yep, there’s plenty of cowbell.)

There’s acid-folk grooviness (Lodi’s “I Hope to See It in my Lifetime”), flute-tickled hippie-soul (Odyssey’s “Broken Soul”), proto-disco (Syreeta’s “I Love Every Thing About You”), whiplash-tight funk (C.G. Cameron’s “Act Like A Shotgun”), and orchestral pop from one of America’s few Asian-American soul singers (Suzy Ikeda’s “I Can’t Give Back the Love I Feel for You”…anyone? anyone?). There are strong tracks from a pre-“Machine Gun” Commodores and a pre-“Don’t Leave Me This Way” Thelma Houston, but the unexpected delight might be three offerings from Frankie Valli & the Four Seasons. Then in a career slump and years away from his “Grease Is the Word” comeback, Valli knocks it out of the park over beds of organic soul dusted with eerie psychedelia (like the Twilight Zone organ in “The Night”).

Local Color
MoWest’s staff was half-Motor City and half-City of Angels. Guitarists Dennis Coffey, Melvin Ragin (a.k.a., “Wah Wah Watson”), and Robert White of the famed Funk Brothers and female conga player Bobbye Hall all came from Detroit to be session musicians. But Gordy also stressed that MoWest would embody the eclectic, wide-open vibes of Southern California. David Pell gathered gifted session players from the local pool of talent including drummer James Gadson of the Watts 103rd St. Band and saxophonist Wilton Felder and keyboardist Joe Sample from The Jazz Crusaders. MoWest even formed a band from its L.A. studio musicians: The biracial combo Odyssey was made up of guitarists Don Peake and David T. Walker and drummer Gene Pello. Peake was part L.A.’s famed Wrecking Crew as was the group’s vocalist, Royce Jones. L.A. native Willie Hutch even flourished as a MoWest producer and vocal arranger.

The Aftermath
“The musical feel was a lot different than what I was used to playing at Hitsville,” Dennis Coffey later recalled in his autobiography. “What I really missed most at MoWest was the hard, funky groove that was born and bred on the urban streets of the Motor City.” Unlike Motown, MoWest had no immediately identifiable sound or aesthetic and its releases floundered because no one knew how to market them.

Gordy was distracted with Motown’s first film project Lady Sings The Blues, and the Motown PR and talent machine, which Gordy had based on the assembly lines he used to work on back in Detroit, was devoted to marquee acts like Ross, Stevie Wonder, Marvin Gaye and a new group from Indiana called the Jackson 5. “We were auditioning acts for Motown,” Pell told The Guardian in 2011. “‘It’s too good for Mowest.’ I heard that a couple of times. I felt we were secondary to Motown people, we weren’t on the first team.” MoWest was only one of Motown’s many other subsidiary labels.

Paying the price for being Gordy’s coalmine canary, MoWest was shut down in 1973 after some 40 singles, 10 LPs, and a sister label in the United Kingdom. Years later, Gordy purchased the street sign for West Grand Avenue in Detroit and relocated that to Los Angeles.

Signature Tracks
“Our Lives Are Shaped By What We Love” – Odyssey’s groove-tastic time capsule (check out Kathleen Warren’s crunchy vibraphone solo) might be a kumbaya plea for love and positivity; it also might be an invocation to join a cult.

“Give Me Your Love” – The Sisters Love were Ray Charles’s backing singers who stepped into the spotlight for this irresistible Curtis Mayfield cover that became a club staple in the 1980s. (Fun fact: One of the founding Sisters was Merry Clayton, who stole “Gimme Shelter” from Mick Jagger and was featured in the recent Oscar-winning documentary 20 Feet from Stardom.)