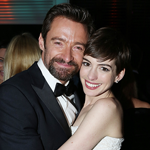 Did you catch the Golden Globes last night? I guffawed and scratched my head and I decided that Adele is the chick I most wanted to hang out with while I chatted with winners in the press room and wandered around backstage before the afterparties began. The good times started on the red carpet with everyone drinking Moet straight to the door of the International Ballroom. Loved Amy Poehler and Tina Fey. Still shaking my head over Jodie Foster’s speech. And why did Mel Gibson have a stuffed hamster on tray? Here’s what you didn’t see onstage:

Christoph Waltz: (Who completely reminds me of Stan Laurel) Came backstage to chat about Django Unchained and his equine prowess, “Riding the horse wasn’t much of a challenge, falling off was.”

Damian Lewis talked about ditching his English accent for Homeland: “The American accent is much flatter,” he said in his soft cockney lilt.

I know Jennifer Lawrence’s dress was Dior Couture but the bust looked like there was a coin purse on each boob. Jessica Chastian’s dress looked like a mint green towel hung around her neck. She started holding her award in the middle of her chest to cover the gaps. My vote for best dressed? Anne Hathaway and Julianne Moore.

Jennifer Lawrence said her 7th grade teacher dubbed her J. Law long before Will Ferrell. Still laughing when a journalist asked her if she was too young for the role she won for. Her answer: “I was wrong for the part and I was too young. We fixed it in post.”

I want to hang out with Adele. She came backstage cackling and when asked if she wanted to be a Bond girl hollering, “NO!” The first Bond film she saw, “One with Pierce Bronson. The one where he was on a speed boat going down the river Thames.” But she did hint at doing a movie.

Quentin Tarantino and Don Cheadle both got use out of the n-word as they chatted with journalists. Cheadle just used it as he took the stage after Tarantino. A lot of shaking heads.

Anne Hathaway provided the best answer to that old chestnut, “What are you working on?” Her answer? “My tan. It’s not going well.” Loved her and Lena Dunham’s pixie cuts, although Dunham’s not so great walking in heels as she tip-toed carefully everywhere. I may have also guffawed when Sly and Ah-nold both walked onstage during the show. Didn’t it look like both had jock itch? Or had just gotten off a horse.

TMI from Claire Danes about her dress: “I am very strapped in. I literally cannot go to the bathroom without taking the whole thing off. There are some serious Spanx in here.”

Jodie Foster: Where to begin. After her cryptic wacko speech (ok, it made me cry in the end) she came to the press room and declared, “No, I am not retiring from acting,” She just kept saying her speech stands for itself. Lena Dunham called it, “mind blowingly beautiful” and Jessica Chastain added, “It was beautiful, I was in tears.” Thanks Robert Downey Jr. for the Los Angeles magazine shout-out!

George Clooney on his pal Ben Affleck getting the Oscar snub, “I’m disappointed. I thought he should have been nominated. But we got seven nominations for the film.” Affleck chimed in, “I also didn’t get the acting nominations. No one is saying I got snubbed there.”

Party hopping. HBO had their usual spot by the pool, Weinstein’s in the old Trader Vics space, WB/In Style on one side of the Hilton and NBC/Universal up top. Sorry Glenn Close. I stepped on the train of her mermaid gown but good as we party hopped. Buses of folks only going to parties arrived about 9 p.m. dumping off peeps like Rachel Zoe. Check out the pics above for NBC/Universal action!

Partin’ shot: as I left the Hilton I ran into Daniel Craig and Rachel Weisz. They were huddling under a heat lamp awaiting their ride. He was rubbing her shoulders before doing a very Bond thing, taking off his tux jacket to put over her shoulders. I knew there’s a reason why he was my favorite Bond.

Jennifer Lawrence Is Glad You Might Not Know Her Anymore