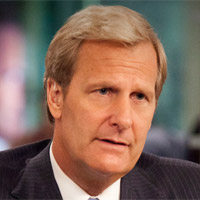 The Newsroom opens with a montage of black-and-white images frozen in time–staid newsrooms and the (mostly) white men who ran them–your first clue that Aaron Sorkin’s new show is nostalgic where it should be visionary. The idealism behind the HBO series is noble (painfully so) but it’s also condescending and oddly regressive. The same guy who explained Facebook to people over 50 is now explaining journalism to people under 30. According to Sorkin, Americans need a paternalistic Edward R. Murrow figure to lead us down the path of righteousness. That’s one idea. Despite this risible conceit, we keep watching the show. After all, we’re journalists (whatever that means in this new century), so there’s nothing we love more than seeing attractive versions of ourselves onscreen. The Newsroom is a trainwreck–and we can’t bear to look away. Instead, we’ve refined our vitriol by cataloguing the show’s five most hateable elements.

When Olivia Munn has the most gravitas of any female character on the show, you’ve got a problem. As economic analyst Sloan Sabbith (Does she front a Spinal Tap cover band in her spare time?), she’s the most professional and articulate woman in the room, which is to say she manages to complete two sentences without descending into hysterical blathering about her personal life. For the record, we don’t believe she would be alone on New Year’s Eve. Ever.

(An Aside: While many critics were bothered by the scene where Mac tells Sloan she wants her to cover economics on Newsnight, partly because Sloan has great gams, we weren’t. This is an accurate reflection of how media executives — including women — often think. Last time we checked, Anderson Cooper wasn’t an overweight, hook-nosed, hunchback, and news anchors of both genders were a collection of conventionally attractive human beings. Next thing you’ll tell us, the real A.D.A.’s of New York City don’t look like supermodels.)

MacKenzie McHale is supposedly a top-notch producer and reporter who has spent years dodging bullets in Middle Eastern war zones. Yet she’s so hapless she can’t work a whiteboard or send a personal email without blasting it to the entire staff. Sure, smart people do dumb things. We’ve all been there. But the email snafu was a ridiculous plot twist designed to propel a contrived storyline — and viewers knew it. While much of the writing on this show is cringeworthy, Sorkin and his underlings (most of whom he reportedly fired) are at their worst when it comes to the female characters. Mac, in particular, seems to have only three modes: piously domineering, faux-contrite, and desperately needy. Through it all, she exudes a “Look at me! Aren’t I cute when I’m being pushy?” attitude that’s like nails on a chalkboard.

We’re not sure which is worse, Maggie Jones when she’s sober or Maggie Jones when she’s drunk. With the former, Allison Pill is flustered, over-eager, incompetent, self-righteous, and obnoxious. With the latter, she’s slurring hamfistedly. In either mode, her character is always grating. It’s not all her fault. The dialogue and plotting don’t do her any favors. Maggie seems like a 13-year-old girl trapped in an adult woman’s body. Even her predictable crush on Jim is drained of all tension because Sorkin telegraphs it from 8 billion miles away.

With all the speechifying these people do — no doubt rife with soon to be Sorkinisms — it’s amazing they get any work done. If you’re too annoyed to hate-watch the show, here’s a summary: Truth is good. Journalism is noble. Money corrupts. Want to hear more of Sorkin’s nuanced worldview? Reality shows and tabloid magazines are evil. Get your gun; Sorkin’s got a barrel of fish.

1. The Mission to Civilize

Yes, this is a real phrase that’s used in the show. Repeatedly. With very little irony. Where to begin? It’s creepy. It’s loaded with horrendous cultural baggage. It has all the myopia and zeal of the Spanish missionaries who forcibly “converted” Native Americans. Maybe Sorkin figures that if he has doughy but still handsome Jeff Daniels say it often enough, it won’t sound quite so obnoxious. No such luck. This one phrase is the crux of all that is wrong with The Newsroom: a cultural, gender and class-based cluelessness epitomized by Sorkin’s self-congratulatory notion that rich white guys will save us all.