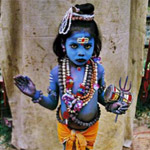 Photograph courtesy of the Annenberg Space for Photography

In addition to having one of the best job titles ever – Explorer in Residence at the National Geographic Society – Wade Davis has one of the most amazing home libraries in the world. As of this week, he’s also the winner of the prestigious Samuel Johnson Prize for Non-Fiction, which he received for his 15th book, Into the Silence: The Great War, Mallory and the Conquest of Everest. On the local front, the illustrious anthropologist, writer, TV producer, and amateur photographer curated the newest exhibition at the Annenberg Space for Photography.

“No Strangers: Ancient Wisdom in a Modern World,” which opens tomorrow and runs through Feb. 23, is a group show that features loads of gorgeous photos shot in dozens of countries. The images include the monks of the Shaolin Temple (yes, it’s real), the Dinka people of Sudan, tribal hunters in Borneo’s Sarawak region, and tons more. The images are gorgeous and heartbreaking. As Angela Beckwith and Carol Fisher, two of the 10 featured photographers, point out: They have been working on the African continent for more than 35 years, documenting 150 different cultures and during that time, many of the lifestyles they photographed have disappeared.

We had a chance to sit down with Wade Davis and ask a few questions about his work, the exhibition, and his upcoming adventures.

What’s it like being an Explorer in Residence at the National Geographic Society?
It’s like being in a giant sandbox. The genesis of the program came about as they were going into their second century. They decided that unlike their rivals they didn’t want to just report science, they wanted to support it. My mission is to draw attention to the plight of disappearing cultures and to help preserve them, not to celebrate the exotic other. While we’ve been engaged in technological invention and wizardry, the other peoples of the world haven’t exactly been idle. For example: the aboriginal people of Australia, whose ethos was not to improve on the world but to keep it exactly the same.

How does telling the story of a culture differ in words than in images?
I’m almost not the person to ask. There’s a huge difference between me and real photographers who tell real stories through their images. For me, photography is more of a pastime than a pursuit. But whatever the medium, the idea is the same: to move people.

How has your writing about other cultures changed since your first book, The Serpent and the Rainbow?
First of all, I know how to write now. That was the book that taught me how to write. I was very fortunate that I never thought of myself as a writer; it allowed me to develop my own voice. I don’t mean to be precious, but I think of myself as a storyteller. I wrote Serpent and the Rainbow holed up in a cabin in Virginia for seven months. But there’s research and there’s Xeroxing, which is what a lot of people do. For the Everest book [Into the Silence] I went through 80 archives — and it took me 12 years.

One of your big influences is the Harvard ethnobotanist Richard Evans Schultes. Who are your influences in photography?
I was very fortunate at grad school in that I had two great mentors, David Maybury-Lewis and, here at UCLA, Johannes Wilbert. In photography, I have been lucky to be in the field with so many great National Geographic photographers. I never had a real job. I didn’t come from money, but I was viscerally incapable of employment. I never set out to be the architect of my own life, but I’m glad I was.

What’s your next adventure?
National Geographic has asked [documentary photographer] Chris Rainier and I to go to the five wildest places in the world.

Ghislaine Maxwell Feels Sorry for Prince Andrew, But Is Grateful for Trump