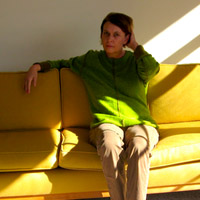 They weren’t supposed to be announced until tomorrow, but the recipients of the 2012 MacArthur “genius grants” were leaked today. (In the age of the internet, apparently no one can keep a secret.) The list of 23 recipients, which includes a few notable Angelenos, runs the gamut from photographers, documentary fiilmmakers, and mandolinists to economists, optical physicists, and bioengineers.

Conceptual photographer Uta Barth, who was born in Berlin but has lived in Los Angeles for many years, is on the list. So is Elissa Hallem, a neurobiologist at UCLA who looks at the consequences of odor detection in invertebrates. She is joined by Sarkis Mazmanian, a medical microbiologist at the Cal Tech who studies the role intestinal bacteria play in human diseases.

Other prominent names on the list include writer Junot Díaz, whose most recent short story collection, This Is How You Lose Her, was published in September, and the aformentioned mandoline player, Chris Thile, who has performed with Nickel Creek. Díaz most recently came to town in September for a Writers Bloc chat, while Thile is touring with the Punch Borthers who play the Luckman Theatre at Cal State L.A. on December 1.

What’s the big deal about being named a MacArthur Fellow? It’s like winning the lottery for personal achievement. Awarded annually by the MacArthur Foundation in a secretive process during which the candidates don’t even know they’ve been nominated, each recipient receives a no-strings-attached prize of $500,000 paid out over five years. In case you’re not a MacArthur-winning mathematician, that’s $100,00 per year. Nice work!

— Uta Barth, 54, Los Angeles. Conceptual photographer who explores the nature of vision and the difference between seen reality and how a camera records it.

— Maria Chudnovsky, 35, New York. Mathematician at Columbia University whose work is deepening the connections between graph theory and other major branches of mathematics, such as linear programming and geometry.

— Eric Coleman, 47, Denver. Geriatrician at University of Colorado School of Medicine who is improving health care by focusing on patient transitions from hospitals to homes and care facilities.

— Junot Díaz, 43, Cambridge, Mass. Fiction writer at MIT who uses raw, vernacular dialogue and spare, unsentimental prose to draw readers into the various and distinct worlds that immigrants must straddle.

— Olivier Guyon, 36, Tucson, Ariz. Optical physicist and astronomer at University of Arizona who designs telescopes and other astronomical instrumentation that play a critical role in the search for Earth-like planets outside this solar system.

— Elissa Hallem, 34, Los Angeles. Neurobiologist at University of California, Los Angeles, who explores the physiology and behavioral consequences of odor detection in invertebrates and identifies interventions that may eventually reduce the scourge of parasitic infections in humans.

— An-My Le, 52, Annandale-on-Hudson, N.Y. Photographer at Bard College who approaches the subjects of war and landscape from new perspectives to create images rich with layers of meaning.

— Sarkis Mazmanian, 39, Pasadena. Medical microbiologist at the California Institute of Technology who studies the role intestinal bacteria may play in a broad range of human diseases.

— Dinaw Mengestu, 34, Washington, D.C. Writer whose novels and nonfiction pieces enrich understanding of the little-explored world of the African diaspora in America.

— Dylan C. Penningroth, 41, Evanston, Ill. Historian at Northwestern University who is unearthing evidence from scattered archives to shed light on shifting concepts of property ownership and kinship among African American slaves and their descendants.

— Terry Plank, 48, New York. Geochemist at Columbia University who probes the usually invisible but remarkably powerful thermal and chemical forces deep below the Earth’s crust that drive the motion of tectonic plate collisions.

— Laura Poitras, 48, New York. Documentary filmmaker revealing the consequences of military conflict abroad in documentaries that portray the lives and intimate experiences of families and communities largely inaccessible to the American media.

— Nancy Rabalais, 62, Chauvin, La. Marine ecologist at the Louisiana Universities Marine Consortium who documents the environmental and economic consequences of dead zones in the Gulf of Mexico.

— Chris Thile, 31, New York. Mandolinist and composer who is creating a new musical aesthetic and a distinctly American canon for the mandolin through a lyrical fusion of traditional bluegrass orchestrations with a range of styles and genres.

— Benjamin Warf, 54, Boston. Pediatric neurosurgeon at Children’s Hospital of Boston who is revolutionizing treatment of hydrocephalus and other intra-cranial diseases in young children and advancing standards of and access to health care in both the developed and poorest regions of the world.