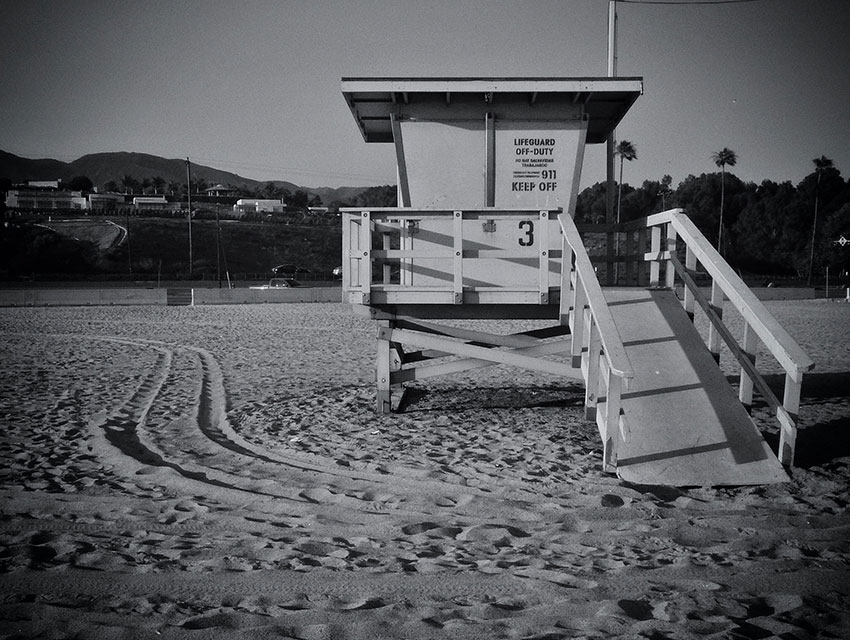 My Ritual: In the Bag
By Dave Gardetta
There was never legal camping in Laguna or Malibu, where as teenagers we slept in sand under stars, but the shoreline was as unpoliced as the impulse. In the south we laid our bags beneath the cliffs of the 10th Street Beach, and in the north, on oleander-lined Trancas. The ocean tone enveloped us, as obliterating as the blackness above. We could have been on Yucatán’s mysterious coast. At dawn we’d waste hours bobbing in the green, glowing water, eyeing the homes of the wealthy that, in the morning light, civilized the shore. It was no longer ours alone, but in select campsites it still may be. » Beach camping is offered at Doheny State Beach in Dana Point, dohenystatebeach.org, and at McGrath State Beach in Oxnard.

My Ritual: Plastic Patrol
By Megan Kilroy
After every rain I visit my nemesis, the Pico-Kenter storm drain. It’s a couple of blocks from my high school in Santa Monica. Out of its mouth erupts the trash from a huge swath of the city—4,200 acres—that then washes into the ocean. I plunge my hand into the sand to pull up plastic bags and utensils and cups. When I was a junior, I joined Team Marine, a group of young environmental activists. Since then I’ve lobbied the state legislature on behalf of bills that would reduce the amount of plastic waste going into the ocean. During beach cleanups, we salvage the garbage—entire containers of it—and take it back to the classroom, where we count the straws and bottle caps and other refuse. On one outing I ran across the sand, flailing my arms as I saw a seagull foraging through the plastic, about to swallow something that could kill it. I want to keep this place safe. Santa Monica is my home. I grew up splashing in the glistening waves and building sand castles near my dad’s lifeguard tower. A single gull flies along the horizon. Maybe he’s one of the birds I saved. I’ll never know, but it’s why I do this. I look at the drain and think, I wish I could just throw a giant net over it.

My Ritual: Boys’ Club
By Andrew Harmon
When I moved to L.A. in 2002, I didn’t have to look hard to discern which patch of Will Rogers State Beach has been patronized for decades by gay men. There on the sands across from Santa Monica Canyon, the swimwear gave it away: skimpy, square-cut Lycra suits in bright prints and baring plenty of quadriceps. The straight dudes playing volleyball nearby cloaked themselves in long board shorts that might as well have been abayas. A scattering of silver-haired men still favored the bikini briefs they wore in the ’50s. The place, affectionately known as Ginger Rogers Beach, was marked by unadulterated voyeurism, dysmorphia, and an absence of children’s sand castles. Sunburns were nursed with margaritas at the Friendship, a few steps east on West Channel Road. Much changed in the late aughts. The Friendship shuttered in 2005. Gay dads now bring toddlers to the beach. The box-cut suit has been replaced by the ’70s, Quiksilver-inspired trunk: short but restrained, like a Lacoste polo. Ginger’s older devotees remain in their Armani-style briefs. Some guys squirm at the sight, though I tend to smile. Ginger will always belong to them. » Parking is at 17700 Pacific Coast Hwy.

My Ritual: Finders Keepers
By Michael J. Goodman
I’ve never met a storm I didn’t like. The pounding surf strips away the sand that’s concealing rocks, fossils, and shells. Last winter, when the first big storm was in full fury over L.A., I checked Google for low tide and made for the coast. Redondo Beach, Palos Verdes, and Malibu are a good bet for agate, jasper, snow quartz, and moonstones. That trip I headed for Santa Barbara to hunt the vertebrae (above) of whales that roamed our seas more than 5 million years ago. Their bones petrify into stones so hard, I need a diamond saw to cut them and expose the beautiful striations. They range in size from a golf ball to a volleyball. I suspect they work free from the ocean floor and roll onto the beach. You need to get close to spot the subtle but distinctly grainy texture of the bone cells, often speckled with tiny crystals. Cut and polished, the vertebrae make great bookends and chimes and—let’s face it—dandy dust collectors. I reached my favorite site; only a pathetic smattering of rocks poked above the sand. Yet another big storm was needed to bring up the bones. Back home, my wife noted that I had jumped the gun last winter, too, and the winter before that. » Goodman sells his finds at the Studio City Farmers Market.