A century ago, when I was still in middle school, my family embarked on what would become a multi-year tradition: Each Sunday night at 8 p.m., we’d gather for dinner at a comically baroque Italian pizza purveyor not far from my parents’ Long Island home. Those dinners ended after my brothers and I moved away, but when my parents followed us to L.A. a few years ago, we brought them back. One night a week, we gathered at a Brentwood restaurant called Pizzicotto, a cheerily unpretentious landmark that had operated on San Vicente Boulevard for almost two decades. Its proprietor, a tiny powerhouse named Isabella, presided over her place with joyful efficiency—flying across the restaurant to greet each group of guests like long-lost kin. My family was no exception.
Isabella knew just where my stepfather liked to sit—“The huuuge table by the window!”—and graciously giggled at his terrible jokes. We came to know a lot about her, as well. She and her sister, Luciana, had started as waitresses at the restaurant that previously occupied the space. When it closed, they pooled their entire savings to open a place of their own. In time, Pizzicotto became a neighborhood staple, a stage set for some of my family’s most intimate moments, and the restaurant’s owners and waiters become our friends. I heard about Isabella’s annual trips to Italy, and her cute Jewish boyfriend who lived with his dad. I knew everything about her except her last name. Last March, the pandemic brought an end to our weekly expedition, though my mom still ordered takeout from them. But one day when she called, she found that the restaurant’s phones had been disconnected, the windows boarded up. After 20 years as a Brentwood institution, Pizzicotto was suddenly gone.

I thought about Isabella often as we were putting out this issue. To be honest, assembling a restaurant guide in a year that has witnessed the utter devastation of the dining industry has been a bit surreal. As I write this, a surge of COVID cases has once again crippled the city. Outdoor dining, the sole remaining source of income for many L.A. eateries, has been banned for the foreseeable future. I considered postponing the issue or canceling it altogether. But then I realized that celebrating L.A’.s restaurants was even more critical at a moment when so many are fighting for their survival. 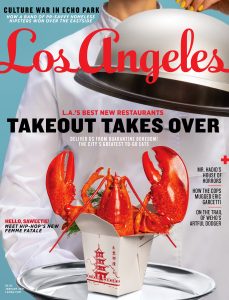 Few businesses will emerge from the pandemic unscathed, but the impact on restaurants has been especially dire. According to the American Restaurant Association, half of the nation’s independent restaurants are at risk of closing forever; another 40 percent say it’s unlikely they’ll be around in six months. In fact, the association reports 100,000 restaurants—one in six across the country, including thousands in L.A.—have already closed, erasing countless jobs and dreams. But economics are an incomplete measure of the importance of restaurants to the culture of this city, from the discovery of Lana Turner in the Top Hat Cafe to Quentin Tarantino writing Pulp Fiction in a booth at Barney’s Beanery.

The establishments featured in this issue are an assortment of cuisines and price points, but each shares a passion and industriousness that reflect the best of the city’s culinary life. We urge you to support these and all of L.A.’s dining establishments, food shops, and food trucks in any way you can. Order in, buy gift certificates, tip heavily. But individual efforts, while crucial, are not enough. To avoid a mass extinction event, the city’s restaurant operators need a real, coordinated relief effort. Earlier this year, the U.S. House passed the Restaurant Act of 2020, which establishes a $120 billion revitalization fund specifically to help small restaurants and bars impacted by COVID-19. The bill passed the House of Representatives and now languishes in the Senate. But time is running out.
Restaurants have always been there for Angelenos when we needed their warmth, comfort, and sustenance; now we need to show up for them.