Home Uncategorized The Story Behind the Music of La La Land 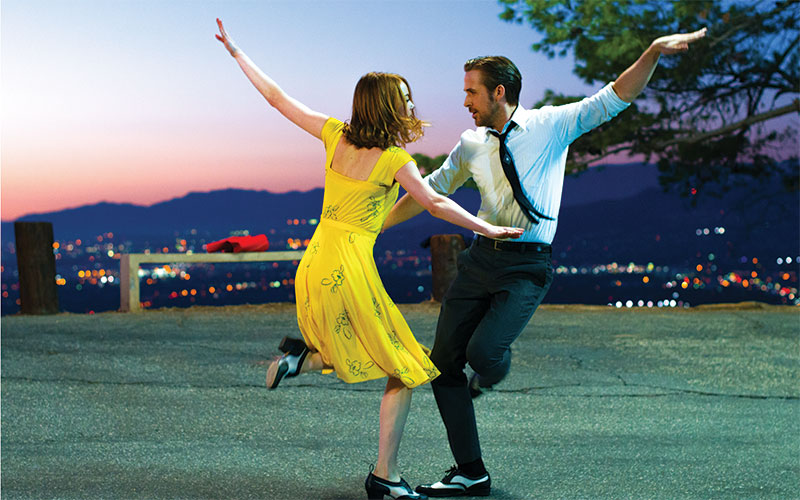 Despite a title that sets off cliché alarm bells, director Damien Chazelle’s film La La Land, opening December 9, is the opposite of trite. The candy-colored musical (which has swept up festival awards and is topping Oscar prediction lists) follows the story of ingenue Mia (Emma Stone) and struggling jazz musician Sebastian (Ryan Gosling) as they endure the highs and lows of chasing ambition. “One of the biggest sources of inspiration was Damien’s vision of L.A.,” says lyricist Benj Pasek. “It’s this city of people who are pursuing dreams that are seemingly impossible and yet those dreams could come true. But it’s also a city where not everybody’s dreams come true.” Of the film’s six original songs, five were a collaboration between Chazelle, composer Justin Hurwitz, Pasek, and co-lyricist Justin Paul. We asked Pasek and Paul (Trolls, Smash) to recount the origin of each number and how their work managed to be both melancholy and optimistic—kind of like L.A.

Song #1: Another Day of Sun The film’s impressive opening number takes place—where else?—on a freeway, firmly planting the action in L.A. An ensemble of suspiciously talented motorists stranded on the 110 belts about the towns they left behind to make it here.
JUS TIN PAUL: “Damien talked about L.A. as  a city that kicks you down but does it with a smile: You can have the darkest night, but then you wake up the next morning and it’s gorgeous. That’s how we landed on this idea of ‘it’s another day of sun,’ which is an L.A.-specific thing. We live in New York, and when it’s a crappy day, you’re like, ‘Of course it’s a crappy day!’ In L.A. it’s beautiful, and that keeps enticing you:  Try again, try again. So you keep chasing the dream.”
BENJ PASEK: “Damien wanted to see a city of people who aren’t necessarily born in L.A. but who came here to see what their life could be.”

Song #2: Someone in the Crowd Tonight we’re on a mission / Tonight’s the casting call / If this is the real audition / Oh, God, help us all… / Is someone in the crowd the only thing you really see?… / Somewhere there’s a place where I find who I’m gonna be /A somewhere that’s just waiting to be found

Fast-paced choreography and bright costumes punctuate a number that follows Mia and her roommates as they primp for an industry party.
PASEK: “Damien knew every shot of this entire scene, and the song hadn’t even been created yet. He led us through the camera angles: The roommates are in the apartment, and then the camera would swing to the car, and then it would show us the party where they’re trying to find the person who can change their lives through some social climbing. Mia goes along with it, but she is more pure in her love of acting.”
PAUL: “What makes Mia and Sebastian worth having a movie made about them is their true love of their art. It’s not about the house party or the big stage. It’s that they’re passionate about what they do.” Mia and Sebastian’s first musical interaction channels the Fred-and-Ginger charm of Old Hollywood.
PAUL: “Initially it was going to be a real meet-cute where Mia and Sebastian find that they’re into each other. And then it was, Let’s make them antagonists who are razzing each other—sort of an ‘Anything You Can Do I Can Do Better’ tone. Eventually we landed on an ‘If I Loved You’ moment, from Carousel, which is as classic as it gets. The subtext is that there is something between them, but we’re catching on faster than they are.”
PASEK: “There was also a lovely collaboration with choreographer Mandy Moore. These types of traditional songs wouldn’t actually end with a lyric. It was great to work with Damien and Justin [Hurwitz] in terms of how the music finished the number and how the dance worked with the lyrics to conclude the brewing romance.” City of stars / Are you shining just for me? / City of stars / There’s so much  that I can’t see / Who knows?  Is this the start of something wonderful and new / Or one more  dream that I cannot make true?

Sebastian meanders down the Hermosa Beach pier just as a purplish Los Angeles sunset dips below the horizon. As he contemplates a date with Mia, this haunting, piano-heavy tune lilts in the background. The lyrics betray a more nuanced layer of his thoughts: Will Mia, like his jazz career, remain just  out of reach?
PASEK: “‘City of Stars’ happened as we were on a plane to L.A., when we were trying to prove our worth to Damien and Justin. Our manager, Richard Kraft, said, ‘Look, they like you; they don’t love you. You’ve got to show up in L.A. and say, “Can we take you out to dinner?’” We thought Richard was insane. He also told us to ask if they had any songs ready that we could come up with lyrics for. We’re  on the plane listening to this gorgeous melody that Justin sent, and we came up with the idea for ‘City of Stars.’ The next day we presented it, and that was the beginning of our collaboration.”
PAUL: “Justin’s music rises and falls—there’s a romantic line, and then it goes somewhere a bit more sad. Consciously or subconsciously, we’re trying to match the gestures in each of those lines.”

Song #5: Audition (The Fools Who Dream) She told me:  “A bit of madness  is key /  To give us new colors to see /  Who knows where it will lead us? / And that’s why they need us…”/ And here’s to the fools who dream / Crazy as they  may seem / Here’s to the hearts that break /  Here’s to the mess we make

Mia performs La La Land’s final song, a ballad about the aunt who inspired her to be  an actress.
PASEK: “We’re always looking for a melody where words can easily pour out. We were inspired by the idea that Mia’s aunt was a little crazy, and that gene is what made her so alive.”
PAUL: “There’s a bittersweet element to it. This song is about a woman who was a little unhinged, but she left an impression. And that flame lives on in her niece.”
PASEK: “There was  a song that was cut, called ‘La La Land,’ that had a lot of road metaphors in it: You don’t know where you’re going to go, but follow every turn and L.A. will lead you. The line in ‘Audition’ of ‘Who knows where it will lead us, and that’s why they need us’—actors and directors and artists and musicians—Damien has created a film that makes you think about whether you could risk being a dreamer yourself.”