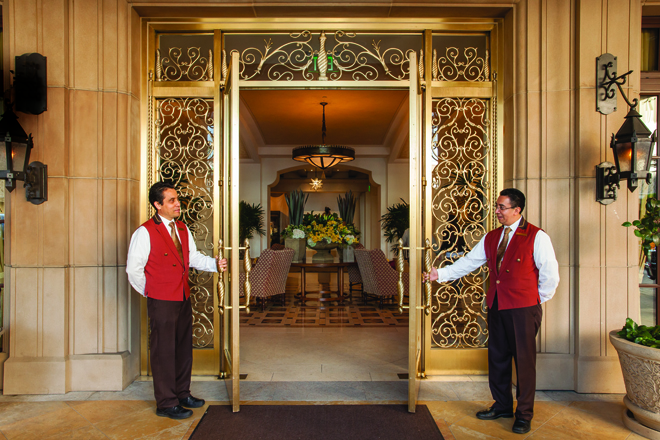 STAY: The Montage Beverly Hills is an A-list magnet, whether Sean Penn is hosting a benefit or the soon-to-be-divorced (Maria Shriver, Frank Mccourt) are decamping after a high-profile split. Only four years old, the Mediterranean newbie is posh in the best sense, which means Edith head sketches in the bathroom, fresh-baked cookies a phone call away, and the scent of fresh flowers filling the air.

EAT: Take a short walk across the Beverly Canon Gardens, dodging the artichoke-shaped fountains and meticulously trimmed lemon trees, and pull up to a table at Bouchon, Thomas Keller’s only foothold in Los Angeles. The grand Parisian look and refined French vittles are special-occasion worthy, while the bistro’s popular monthly “Ad hoc fried chicken nights” feel positively bourgeois. Is $395 burning a hole in your pocket? Urasawa, the ten-seat omakase shrine, will gladly take it off your hands (that’s what dinner costs per person, before drinks and tip). For the quintessential L.A. dining experience, it’s Wolfgang Puck’s revamped Spago on Canon Drive. Keep an eye out for Quincy Jones, who often holds court there.

SHOP: If you’re shopping for clothing, there’s Rodeo Drive, of course (though we prefer the hipper garb at Boulmiche). Better yet, have someone with impeccable taste do the work for you. After a brief consultation to determine whether you’re more Versace than St. John, Joe Katz, The Montage’s in-house fashion stylist, brings selections to your room (his rates start at $1,790 for a half day). Or he can have the hotel’s Mercedes shuttle you to the VIP rooms at Dior, Dolce & Gabbana, and Chanel. Shopping for gifts, not threads? The frayed red awning at Edelweiss candy kitchen, on Canon, belies the treasures inside. Around since the 1940s, it has catered to the likes of Sinatra and Bacall. And you’ll never go wrong at Gearys, on Beverly, which stocks a dazzling array of classic and classy tchotchkes.

DO: They’ll recite you chapter and verse on the subject of scotch at £10, The Montage’s gorgeous bar, where a few sips cost anywhere from $50 to $64,000. Nobody gets in without a reservation, and even those who have one must be escorted upstairs. At The Spa Montage you’ll be treated like a maharaja; we recommend the coed mineral pool. Also on our list: the citrus quartz rubdown at the Beverly Wilshire, the Walker and Eisen-designed hotel that has served everyone from Elvis to Barack. For entertainment, the Paley Center for Media and the Academy of Motion Picture Arts and Sciences, both within walking distance, hold events that are open to the public, but you must book in advance.

WHAT TO BRING
YOUR WALLET, AN ATTITUDE