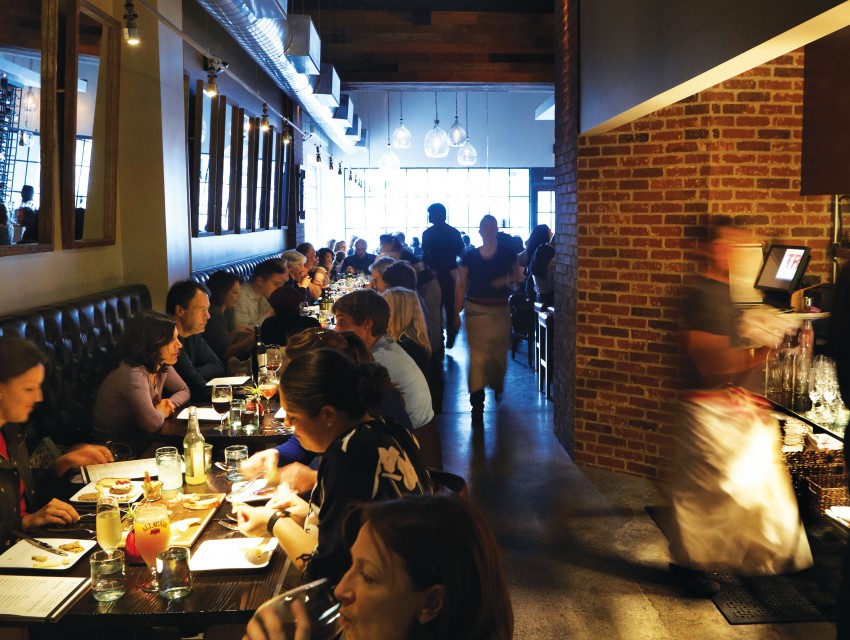 I pull up in view of the would-be brunchers waiting outside Gjelina and smile with the knowledge that I won’t be joining them—not yet anyway. If I were in the mood for a sit-down meal, I could take a seat at Casey Lane’s The Tasting Kitchen for a brunch of waffles and “clucks” (fried chicken) and a stiff Morning Bracer cocktail—you know, for digestion. But Abbot Kinney Boulevard is well suited to grazing—and shopping. A bacon-Gruyère-pretzel croissant from Hans Röckenwagner’s 3 Square Café + Bakery in hand, I browse the vintage cake stands at Bountiful, the high-concept zeppelin salt and pepper shakers at A+R, and the hand-thrown Japanese teapots at Tortoise General Store. Later I participate in a traditional Venice ritual: trying to palm an entire bubbly-crust pizza while squatting on a milk crate beside Gjelina Take Away. Then it’s on to the café and gourmet market Local 1205 for a mason jar of organic cold-pressed apple-kale-pineapple-cucumber juice to even things out.

After a nap at my hotel—I chose the Fairmont Miramar Hotel & Bungalows for its restaurant (Fig) and its spa (Exhale Mind Body), which offers an “Acu-Organ Detox” treatment that sounds like a must-try for a glutton like me—I’m ready for a nosh. I stroll Ocean Avenue to BP oysterette, one of the few sea-view restaurants in these parts, and slurp down a half-dozen Kumamotos with a glass of Qupé marsanne. That first course under my ever- tightening belt, I’m lousy with options for dinner. Andrew Kirschner’s Tar & Roses specializes in rustic dishes like Jerusalem artichokes with goat cheese, almonds, and lemon. Mélisse occupies the other end of the spectrum, serving Josiah Citrin’s elaborate Cal-French tasting menus (how about lobster bolognese with truffle froth?) in a minimalist setting. In the end, Superba Snack Bar beckons me back to Venice, where Jason Neroni’s handmade pastas—garganelli, cavatelli, bucatini—await. He has a no-reservations policy for parties of fewer than six, so meanwhile I chill next door at Venice Beach Wines.

Since I’ve gorged on everything from bone marrow custard to spaghettini with uni, a diges- tif is in order, and acclaimed barman Vincenzo Marianello has something special for me at Copa d’Oro. Featuring fresh herbs, juices, and other farmers’ market booty, the libations at this intimate cocktail bar are undoubtedly the Westside’s toniest. With gin, Campari, and Cynar settling my stomach, I have no choice but to hoof it back to my hotel, sated and sleepy.

Up early, I join the joggers on Santa Monica’s famous oceanside bike path. It’s flat, so I can clock a few miles of gawking at beach houses before my legs tell me it’s time to stop—and before my body is capable of eating again. Brunch is the real reason I’m staying at the Fairmont. Helmed by chef Ray Garcia, Fig is one of the best hotel restaurants in the city. A Los Angeles native, Garcia offers an ad- venturous morning menu that includes waffles with bacon ice cream and spicy huevos rancheros with house-made lomo cabecero, or cured pork loin. Sipping coffee on the restaurant’s sunporch that overlooks the pool, I’m thankful I asked for late checkout. I may never eat again.

WHAT TO BRING
YOUR APPETITE, STRETCH PANTS

10 Local Stores Where You Can Build a Wedding Registry That’s Totally L.A.

My LA to Z: Claire Holt