Home Travel 10 Reasons to Spend the Weekend in Jail 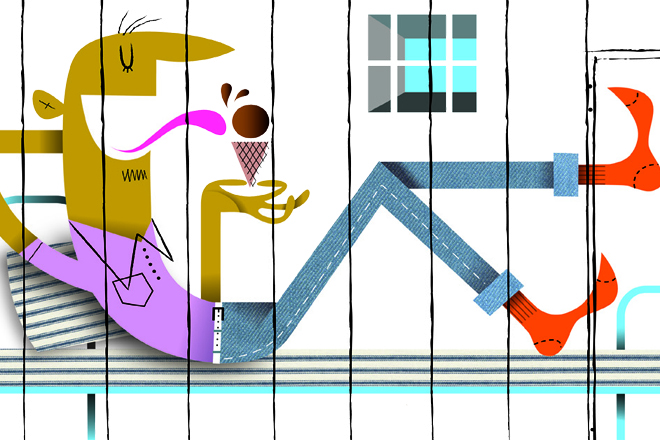 There are no other occupants (or should we say inmates?) at the Jailhouse Inn, which has only one suite and used to be a real jail. So you won’t have to whisper.

No one wants to be an actual hardened criminal. But the bad­ ass way Hollywood portrays L.A. outlaws (think Training Day or Bugsy) makes it thrilling to pretend.

The town square—a triangle, really—has a wood tower that houses the original bell from the 1885 schoolhouse. This is also where the pod people in 1956’s In- vasion of the Body Snatchers began their assault.

Bored with the yard? Break out and explore nearby Bailey Canyon Park, whose trailhead leads to a route that connects to the Mount Wilson trail.

From 1915 to 1916, director Frank Capra lived in Sierra Madre during his freshman year at what would later become Caltech. Many believe the town served as the prototype for the idyllic Bedford Falls in It’s a Wonderful Life.

Head to 341 Sturtevant Drive, the onetime home of writer Anaïs Nin—the wild child of Paris— and her much younger lover, Rupert Pole. The couple lived in the multistory home for five years in the 1950s.

Lucky Baldwins Delirium Pub & Cafe is named after the 19th-century businessman whose vast land holdings became Arcadia and Monrovia. It offers 46 domestic and international craft beers on tap and makes a stellar fish-and-chips: crisp and not too greasy.

At the ice cream shop Mother Moo Creamery, owner and master preserver Karen Klemens concocts flavors like salted caramel, and she makes a mean organic triple milk. Her house-made preserves are top of the line.

Launched in 1917, E. Waldo Ward & Son is Sierra Madre’s old- est business. Want to know how it makes its famed jams, jellies, and jarred olives? Sat- urdays feature tours of the kitchen and the two-and-a-half-acre homestead, where the citrus for the marma- lades is grown.

At Mary’s Market and Café, a diner that’s been around since 1922, they bake their own pastries and have a terrific sandwich menu. But don’t expect a bill: When it’s time to pay (cash only), you go to the register and Carolyn, the owner, asks what you ordered and rings you up.

WHERE TO SLEEP
JAILHOUSE INN, $195

WHAT TO BRING
STRIPED PJS, HANDCUFFS

Sierra Madre Is a Storybook Town Full of Makers

Beer Frenzy: The Inside Scoop on Where to Taste Pliny the Younger