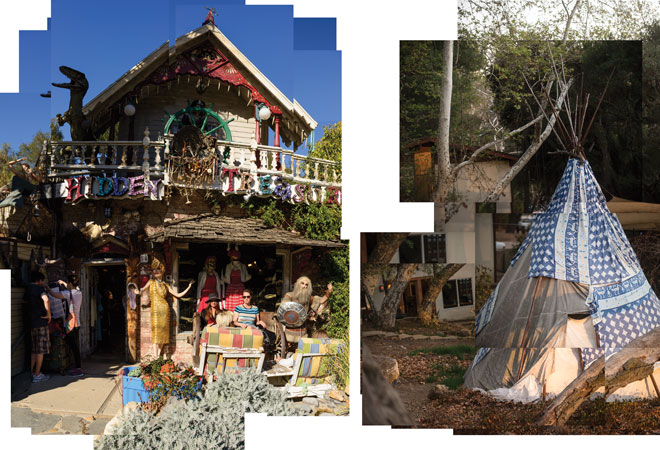 My earliest memory of Topanga Canyon is from when I was around seven or eight, and it’s a forbidding one. It was Christmas Eve, and my family lived in the not-quite-yet-suburban northern San Fernando Valley, which nonetheless felt very much like civilization compared with Topanga, where Route 27 wound into and up and down and through the canyon’s wilds. My father was driving to visit a friend from the aerospace company where he worked, and on the way Dad gently explained that recently his friend had lost his wife in a canyon fire. Only many years later did the recollection say something to me about the pull of the canyon, which is such that, though Topanga had taken his wife, the widower had not forsaken Topanga. I would learn, after moving to Topanga myself, that its denizens find the prospect of living elsewhere unthinkable. Ironically, if only because over the years I’ve known so many—from college deans to studio executives to European expats—who come to Los Angeles aspiring to nothing other than living in Topanga, I wound up there by accident. Assuming I gave such a thing any thought at all when I was seven or eight, it wouldn’t have occurred to me that a significant part of my life might unfold in these gnarled darklands that claim the loves of men’s lives, like the enchanted woods of some westbound 19th-century gothic novel. Eastern settlers first wandered the Topanga Creek during the presidency of Martin Van Buren, and it’s safe to say that almost two centuries later this foliage-blasted ghost-scape of Chumash and Tongva tribes—through which I raced to the sun and beach as a teenager—has changed little. When we moved here, my wife and I assumed house-sitting duties at an abode jutting from a hillside over what’s called Old Canyon, the part of Topanga even more remote than the rest, more afflicted by elements, the place where cell service goes to die. But there we had our son, and as happens in the face of parenthood’s onslaught, the bucolic held sway, side by side with the danger.

In the canyon’s anarcho-mystic fashion, its 8,300 residents are possessed of a communal sense maybe to a fault, not even counting the nudist camp that existed next to the state park not so long ago. Among the gorges and ravines that hang on Los Angeles’s shoulders like a necklace, Topanga—nestled in the cleavage of the Santa Monica Mountains—is the most singular of ornaments. Laurel Canyon? Please. Forgive me, but Laurel Canyon is for sissies. Laurel isn’t a canyon; it’s a detour to Sunset Strip clubs with a couple of knolls thrown in, the missing evolutionary link between Toluca Lake and Bel-Air. Laurel Canyon has Jaguars; Topanga Canyon has jaguars. Putting things in ’60s rock and roll terms: The Mamas and the Papas trilled among the Laurel dales, while Neil Young and Crazy Horse raged through Topanga dives (the house where Young wrote and recorded his 1970 masterpiece, After the Gold Rush, remains visible from the canyon boulevard). Laurel inspired the Doors to write the hippie lullaby “Love Street,” while Topanga drove them to lay down the storming “Roadhouse Blues.” Topanga is where Charles Manson trembled before it got too weird for him, at which point he hastened to Laurel, more his laid-back style. To be sure, Topanga still lures day-trippers uncomprehending that they’re in over their heads—hikers from Brentwood, bird-watchers from Pasadena, rock climbers from Marina del Rey, and worst of all the bicyclists who think they’re in the Tour de France (fair warning: when I finally ascend to my rightful throne as canyon king, the whole bike thing is so over). But when night falls, the canyon reclaims itself, with all its trespassers—including those of us who live there—traveling on expired visas. And after the winter of icy mornings and the spring of ridge-to-rise sproutings and the summer that sears the sky of its blue, autumn comes and you don’t belong in Topanga if you can’t hold your breath in dread and smell for smoke at the same time. The Santa Anas pick up, rains fly north for the December equinox, and the fires come, or don’t; the last big inferno was two decades ago, so the next is as inevitable as the earthquake that will drown those of you closer to sea level. If you live in the canyon, you hope that doom has more patience than old age. Like all paradises, Topanga is pitched at the tipping point of promise and peril.

It’s Time You Took a Walk Around the Hollywood Reservoir