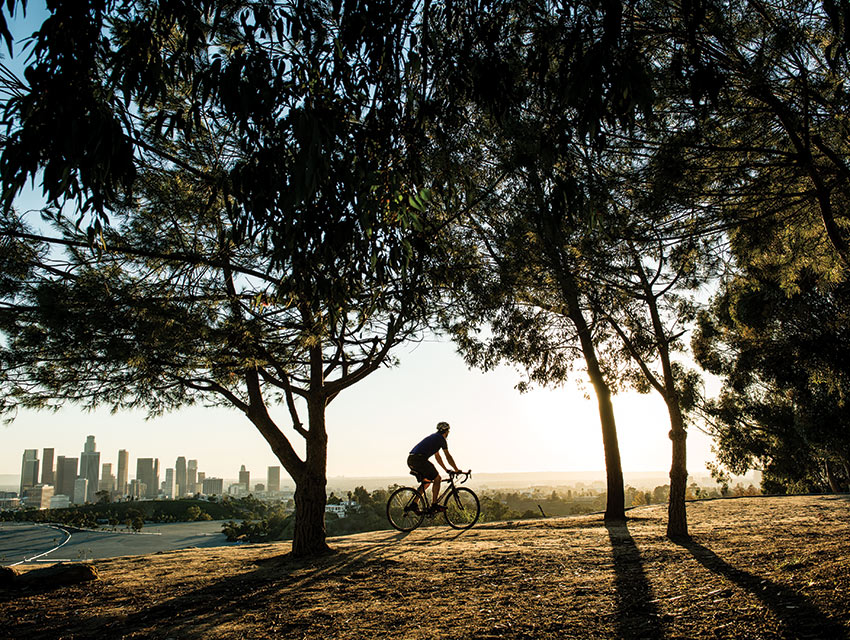 Ever since I moved to Echo Park 15 years ago, I’ve been living with and utterly failing to come to terms with the huge landmass that is Elysian Park. Most of L.A. only thinks it knows what’s here—cops, Dodgers, parking lots—but the place is sneaky. Truth is, Elysian is home to a parade of oddments and unexpected delights that you have to stumble across as often as you plan to find them. Low-riders flip the switches and promenade down a grand concourse of palm trees in an annual rite that predates the Dodgers. Fascinatingly whiskered young dog walkers are brought to a halt by the remains of mutilated goats. You can see gorgeous red-tailed hawks confused by the fanciful handmade birds an unknown local artist puts up in Elysian’s trees. It is where quinceañeras border guerrilla art openings under the noonday sun while the overgrown hillsides hide the community stables and tennis courts and arboretum planted here.

It seems good to know that Elysian Park is the oldest park in Los Angeles (opened in 1886) and the city’s second largest (604 acres). It seems somehow more important to know that at its birth Elysian Park was considered useless land, named after the spot in ancient Greece where vanquished heroes gathered. A place, in other words, where dead things collect as well as one where they sometimes come to life. Back in 1894, early 20th-century writer and explorer Charles Fletcher Lummis wrote that while “it is no exaggeration to say that this tract is capable of being transformed into the most unique and beautiful park in the United States, if not in the world…even by our own citizens it is as yet little known and appreciated…

Unless you live nearby or are looking for a new way to beat the traffic, you can drive to Dodger Stadium for years without seeing the solemn gates of the police academy or the fire department training facility that began as a naval armory built atop what was once a Jewish cemetery. Griffith Park has the Autry Museum; Elysian has the Barlow Respiratory Hospital, its low wood buildings—built for TB patients a century ago—a rustic Smurf village.

There are layers to Elysian, and unseen pockets engulfed in greenery. In that way Elysian still seems wild and unknowable, even when it’s right in front of me. Like the lime green lizard I saw skitter past on a recent walk. As long as the park has existed, there have been legends that Spanish settlers buried their gold in the hills and ravines of the area. Gold: It’s the quiet green spaces in a city short on them; it’s the connection to a past that is missing in so many other neighborhoods; it’s the Peter Shire monument to a pair of Echo Park activists that looks like a bizarre radio, and it’s among the oldest collection of trees in Los Angeles. Treasure in plain sight.

CityDig Postscript: A Piece of the Puzzle Falls Into Place in the Mystery of Elysian Park’s Greco-Roman Roads

CityDig: The Utopia of Elysian Park Before Dodger Stadium