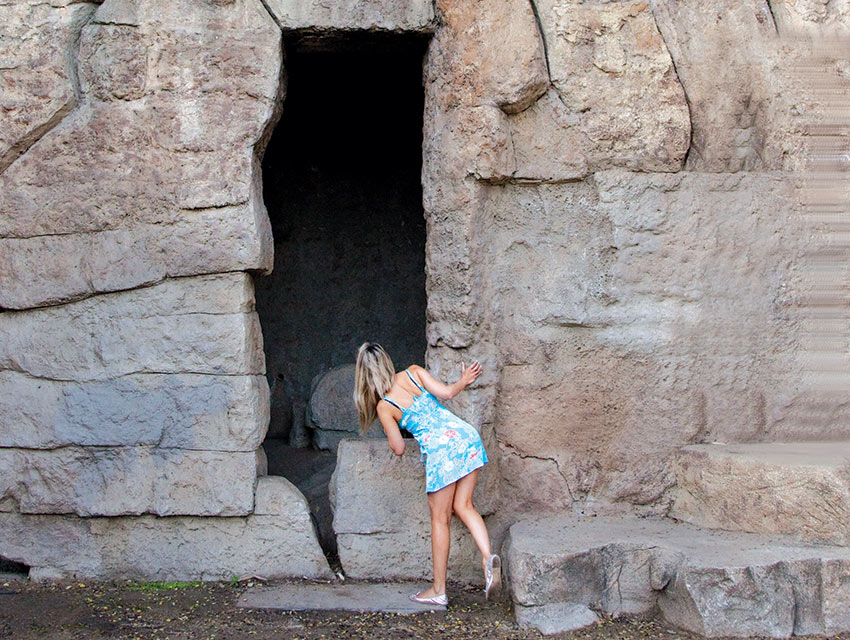 Old Zoo
Tucked away in a Griffith Park dell lie the oxidized remnants of what served as the city’s official zoo from 1912 to 1966. The faux-rock outcropping of the big game exhibit is the most striking vestige, but the cramped iron cages, some with ivy creeping through, will haunt you. At the end of Griffith Park Drive, walk through the picnic area and up the wide path to the Old Zoo picnic grounds. // Griffith Park Dr., 323-913-4688.

Fort MacArthur Gun Batteries
The pair of massive guns that guarded San Pedro could fire 1,560-pound projectiles 14 miles. What remains of the Battery Osgood-Farley are the boomerang-shaped concrete emplacements built in 1919 and the bunker that burrows between them. There’s a claustrophobic military museum inside and, a few hundred yards away aboveground, the enormous Korean Bell of Friendship, which stares out onto the coast. // 601 S. Gaffey St., San Pedro, 310-548-2631.

Mount Lowe
In 1895, Thaddeus Lowe built a railway that carried millions of visitors from Altadena nearly seven miles up the San Gabriel Mountains. They were bound for a pair of hotels on Echo Mountain and Lowe’s Ye Alpine Tavern. He quickly went bankrupt; the railway operated for 43 years before the repeated fires and floods proved too much. Rusted cogs, crumpled metal, and barren foundations are all that’s left. The shortest hike there is a three-mile round-trip from the Eaton Saddle parking area between San Gabriel Peak and Occidental Peak.

Bottle Village
It was 1956, and Tressa Prisbrey needed a place to store her burgeoning pencil collection. Retrieving materials from the dump, the 60-year-old would create 13 buildings along with a clutter of sculptures and installations. The gates were locked after the Northridge quake caused several roofs to collapse. But you can still see plenty, from the creepy doll’s head shrine to the mosaic walk to the Rumpus Room. // 4595 Cochran St., Simi Valley, 805-583-1627.

Solstice Canyon
The canyon’s long history of wildfires has left it speckled with vestiges of civilization. From Solstice Canyon Park Education Center, follow the Solstice International Trail, and you’ll pass the stone walls of a hunting cabin from 1903. Farther up, a broad stairway ascends to the concrete pad and brick chimney of Tropical Terrace, an estate that burned in 1982. From there, the Rising Sun Trail snakes past the foundations of a TRW research facility and back to the parking lot. // End of Corral Canyon Rd., Malibu, 805-370-2301.

Paramount Ranch
Squint and you’d think you were looking at a ghost town. A national park today, the ranch has appeared in dozens of films since the 1920s, when Paramount Pictures owned it. In the ’50s, a fan of westerns bought the land and built an Old West town out of props. The spot continues to attract productions with its weather-beaten train depot and mining supply store, its log cabin and dusty streets—ideal picnic entertainment. // 2903 Cornell Rd., Agoura Hills, 805-370-2301.

L.A. Zoo’s New Baby Gorilla Has a Name Fit for an Angeleno

Which L.A. Zoo Is Better, the Abandoned Zoo or the Actual Zoo?