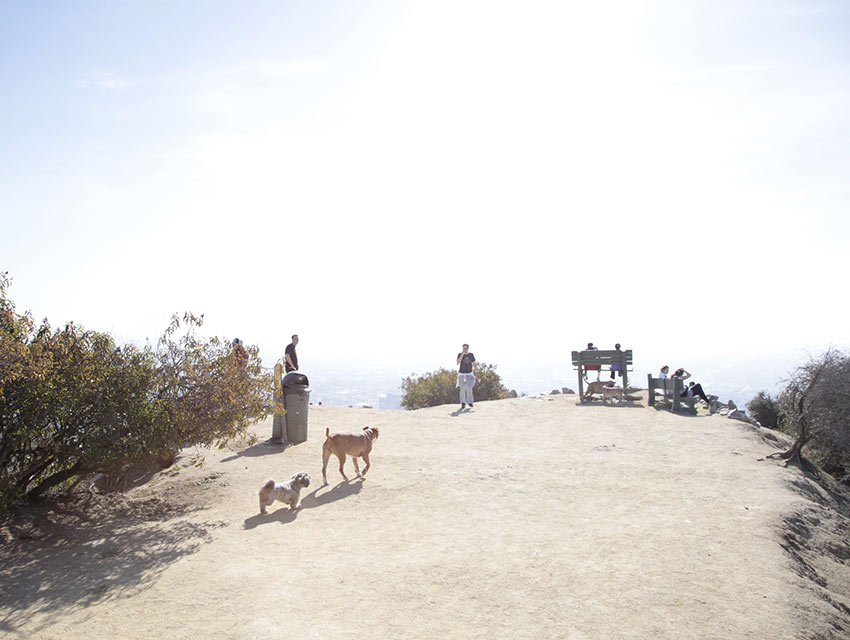 Here are a few things I’ve seen during my 18 years of hiking in Runyon Canyon: dozens of horses, a very fat goat, several rattlesnakes, hundreds of bare midriffs, thousands of happy dogs, Cameron Diaz and Drew Barrymore walking their happy dogs, an injured coyote, an abandoned tennis court, a man with a sitar, lots of people picking plastic water bottles out of trash cans, a woman praying, tattoos, a rainbow, the foundations of several ’30s-era buildings, paparazzi, fire trucks, and a casualty of the steep ridgeline trail being strapped to a stretcher and hoisted to a helicopter (she’d dislocated her shoulder). Recently, during a downpour, I greeted a fellow soggy dog walker with a smile. “Diehards,” he proclaimed, which is when I realized I’d had another sighting: the Oscar-winning writer-director Curtis Hanson.

But until a few months ago I hadn’t seen the labyrinths. One afternoon around dusk, my friend Gerry and I were descending the fire road. He walked to the edge and peered over into the canyon. “Huh,” he said, focusing on a concrete pad about 400 feet below. “Someone built another one.” Joining him, I saw a pair of rock spirals artfully arranged on the place where a mansion once stood. Gerry said there’d been one labyrinth there forever. But now there were two.

Such hiding-in-plain-sight moments are a part of living in Los Angeles. I frequently find myself turning a corner here and wondering, How is it possible I haven’t seen that before? L.A. isn’t a city that blithely offers up its secrets. Even the canyon itself, despite its centrality and occasional fame (a 1992 episode of Seinfeld may be its first onscreen moment), strikes me as a secret space. Whether you enter at Mulholland Drive to the north or through the two southern entrances at Fuller Avenue and Vista Street, once you’re inside, you’re truly somewhere else. It’s a wormhole into the natural world. You walk through the gates—which someone (who exactly?) comes and locks up tight each night after dark—and the city disappears.

The heart of L.A. beats within the park. There’s a regular yoga class taught on the grass at the southernmost end, and personal trainers shout instructions on the tennis court (built, as was the rest of the estate, by the famous Irish tenor John McCormack). There’s an honor bar at the Fuller gate kept stocked with cold water, bananas, and granola bars by a mysterious someone who trusts us to pay for what we take. There’s the past (Errol Flynn once lived in the pool house of the estate in the ’50s), and there’s the present (tunnels for the Metro Red Line run deep underground). For a while this year there was a direct connection to the future—a Dream Box, bolted to the ground, complete with paper, pencil, and directions: Write down what you wish for, put it in this box, and it will come true.

Stumbling upon the box was like being ten years old again. As with the honor bar vendor and the labyrinth builder, the Dream Box creator had hidden it in the park for me to find. And by climbing to the highest point, I’d earned the pleasure of discovery. Here, in a city usually so focused on attracting the biggest audience, was a whimsical gesture aimed at a limited few. I wrote down a wish and continued down the trail. —Amy Wallace

Labyrinths: Where to find four others around town

Peace Awareness Labyrinth and Gardens
You’ll discover it behind a spectacular Italianate mansion in West Adams—home to John-Roger’s Movement of Spiritual Inner Awareness. Garden tours are conducted on Sundays from 12 to 4. //3500 W. Adams Blvd., West Adams, 323-737-4055.

Forest Lawn Memorial-Park
With 11 circuits, or rings, and four quadrants, the cemetery’s maze is modeled on that of the Chartres Cathedral in France. Find it in the Gardens of Contemplation—and enjoy the view. //1712 S. Glendale Ave., Glendale, 800-204-3131.

Saint Augustine by the Sea Episcopal Church
Set in the basement, the Chartres-inspired course leads you through Purgation, Illumination, and Integration. Silence is expected as you pad shoeless toward the central rosette representing the Virgin Mary. Call ahead. //1227 4th St., Santa Monica, 310-395-0977.