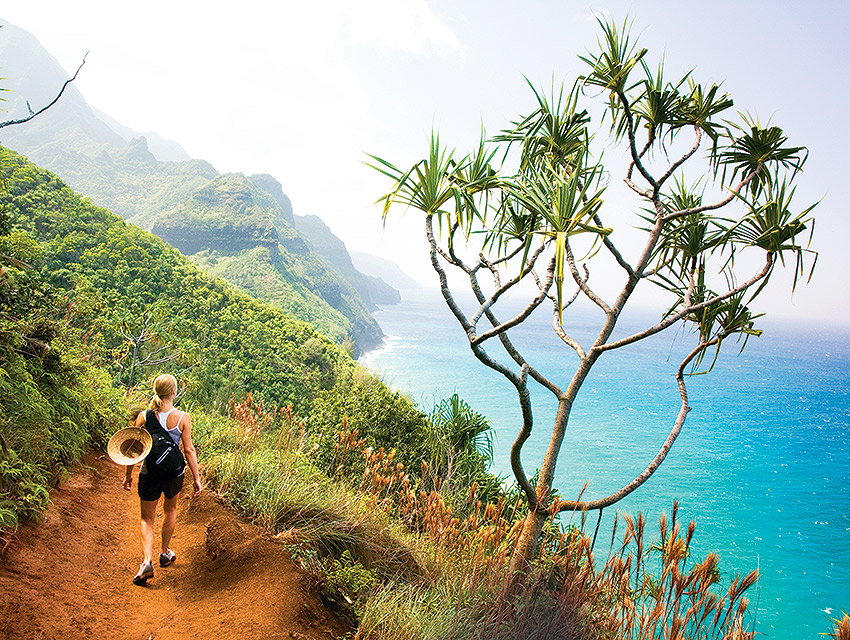 Maha’ulepu Beach
To reach the dreamy site you can walk the four-mile-plus Maha’ulepu Heritage Trail, starting from picturesque Shipwrecks Beach at the Grand Hyatt in Poipu. Or make the 20-minute drive on the dirt road (potholes and all) that begins near Poipu Bay Golf Course. You’ll know you’re in the right place when halfway down the deserted sands you spot the Gillin Beach House, a bungalow still used by the land’s owners. Just past Maha’ulepu is Kawailoa Bay, a favorite with kite surfers. Follow the slim path north (watch out for that blowhole!) to Pakamoi Point, where aquamarine waves crash against the cliffs. If you continue on for another 15 minutes to Ha’ula Beach, you can bask in the sensation of being the last creature on earth.

Canyon Trail
It’s no secret that Waimea Canyon is a wonder, a Grand Canyon-meets-Badlands display of geology gone wild. Lots of visitors trek along the Canyon Trail to see Waipoo Falls. What the guidebooks fail to say is that the “view” is of a tiny cascade atop the waterfall. But an unmarked breach in the undergrowth near the lower basins leads to some of the most spectacular views in the kingdom—a canopied walkway that constitutes the second half of the Canyon Trail. After swallowing whole vistas of rock works, you’ll eventually zag into the forest, which leads to Kumuwela Road and the YWCA’s Camp Sloggett; follow the signs to the Halemanu-Koke’e trail, which ends at Halemanu Valley Road a mile from your car.

Grove Farm
Sugarcane, once the smoky giant of Kauai, has gone the way of the kamao: extinct. What most visitors think of as cane is actually guinea grass, a pest, which you’ll learn on the Grove Farm tubing expedition offered by Kauai Backcountry Adventures. AOL chairman Steve Case bought the defunct Lihu’e plantation in late 2001 but allows small groups to ride inner tubes along two-and-a-half miles of waterways that once irrigated the crops. During the 30-minute van trip to the launching point, guides dole out facts about the farm’s new pursuits (cattle, coffee, corn) and its use as a research station. But lazily floating through five tunnels and a set of rapids is a certain kind of bliss.