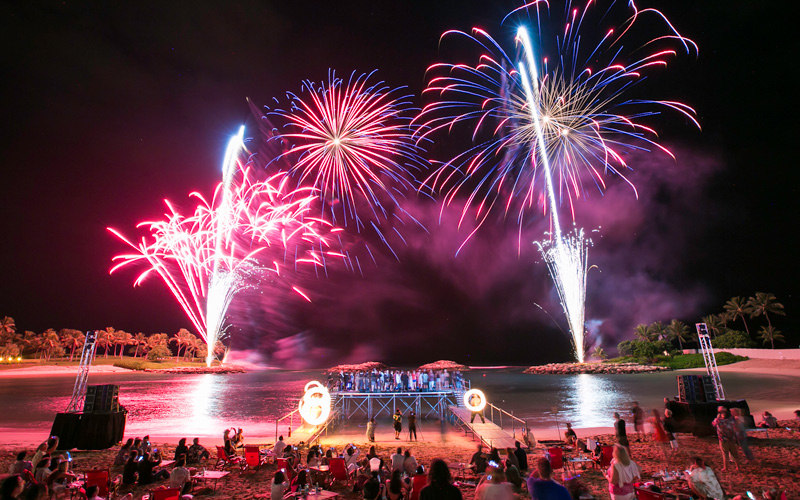 When it comes to unique island vacations, look no further than O‘ahu’s sophisticated urban vibe, tropical island beauty, and colorful kaleidoscope of cultures and history. You can experience this 21st century east-meets-west paradise through O‘ahu’s amazing fall lineup of festivals and special events.

Hawai‘i Food & Wine Festival
What could be better than savoring a chef’s tantalizing creation and a handcrafted cocktail as the sun sets at Waikīkī? Few culinary events are as rooted in their locations as the 6th Annual Hawai‘i Food & Wine Festival (www.hawaiifoodandwinefestival.com), which comes to O‘ahu October 26 through 30. Co-founded by Roy Yamaguchi and Alan Wong—James Beard award winning chefs and well-known restaurateurs—the festival showcases the natural bounty of Hawai‘i. Internationally renowned chefs from Hawai‘i, the U.S. mainland, Asia, and around the globe (including L.A. chefs Niki Nakayama of n/naka, Mariah Swan of ICDC, and Michael Cimarusti of Providence) will prepare their specialties with items sourced from Hawai‘i’s farms, ranches, and seas. In fact, the festival now features more than 100 internationally renowned chefs, sommeliers, mixologists, and purveyors coming together for five days of interactive food and beverage experiences in one of the world’s most beautiful spots. Proceeds benefit local agriculture and culinary education programs.

Imagine tasting contemporary and traditional versions of time-honored Hawaiian dishes at the Urban Lū‘au or sipping irresistible cocktails created by master mixologists while sampling the culinary genius at the Hungry Monkey. Enjoy the Pacific Coast’s finest wines and the inventive dishes at A Culinary Flight and then head to the Clash of the Ramen After Party. These are just a few of the delicious adventures that await in O‘ahu this October. Island and international styles hit the runways at Hawai‘i Convention Center during the 3rd Annual Honolulu Fashion Week November 10 to 13. Once again, Honolulu Magazine is partnering with Lynne Hanzawa O’Neill, the Hawai‘i-born mastermind behind many New York Fashion Week shows. Street-smart urban wear, contemporary tropical styles, and sizzling swimwear will be on display at runway shows and for sale at pop-up boutiques featuring Hawai‘i’s talented designers.

The dynamic fashion show lineup includes Runway to Runway, which is sponsored by Hawaiian Airlines and features designs inspired by destinations where the carrier flies. The Reyn Spooner Show highlights this iconic island brand famed for its reverse print aloha shirts and unique collaborations with other Hawai‘i legacy brands. At the Beautiful Survivors Fashion Show, sponsored by Hawai‘i Pacific Health, former cancer patients will walk the runway in fashions by Hawai‘i designers. The Reach the Runway Show featuring Kini Zamora (Project Runway standout) is also a benefit. The proceeds will support Reach the Runway, a mentorship opportunity program for Hawai‘i middle school students interested in fashion careers. Sun, Sand, and Surf will showcase swimwear and sexy streetwear. Honolulu Fashion Week is filled with these and many more stylish events and shopping opportunities.

Hawai‘i International Film Festival
With its mid-Pacific location, O‘ahu is the ideal base for the 36th Annual Hawai‘i International Film Festival, which takes place November 3 to 13, 2016. Dedicated to advancing understanding and cultural exchange between Asia, the Pacific, and North America, HIFF regularly attracts 50,000 film enthusiasts who experience nearly 150 features, documentaries, short films, and music videos from about 45 countries. HIFF is the place to catch world premieres from across Asia, the U.S. mainland, and Europe. It’s also well known for showcasing local cinematic talent from Hawai‘i. Along with screenings, HIFF also hosts seminars, workshops, and awards ceremonies. And while many screenings are, of course, held indoors, you can count on outdoor screenings that take advantage of O‘ahu’s magnificent weather.

In addition to new international cinema that focuses on the Asia-Pacific Rim, HIFF 2016 programs include the annual European film section and the Film for Thought program presented by the Hawai‘i Council for the Humanities, which combines thought-provoking film with scholarly debate. HIFF will also present the fifth edition of the Creative Lab, featuring workshops, seminars, and panels that explore new media and screenwriting.