Home The Hart and the Hunter

The Hart and the Hunter

Flat as a schoolhouse ruler, crisp as a Kentucky dawn, the chicken cracklings that get shot with chili vinegar at this Melrose venue serve as a beacon for the spirited cooking of Brian Dunsmoor and Kris Tominaga. It’s all-out, high-impact Southern cooking. At brunch praline bits are sneaked into pecan pancakes. At dinner, as T.S. Eliot looks down from a tile wall, cornmeal-dusted oysters are served with bacon tartar sauce and a mason jar of creamy smoked trout shares a board with avocado-heaped toast.

What with the horse show ribbons and the framed prep school yearbook pages, there’s a Cheeveresque spirit to the Palihotel lobby, but old money gentility ends at the boutique inn’s restaurant door. Brian Duns-moor and Kris Tominaga, whose Wolf in Sheep’s Clothing pop-up transported Angelenos to the South, continue to explore the region in a quirky blue-tiled dining room, where a T.S. Eliot portrait peers over a communal table. Dunsmoor worked with Hugh Acheson in Athens, Georgia; Tominaga, with Joe Miller in Venice. The two display exquisite technique. Using crawfish stock (instead of milk) to stretch out a Cajun roux imparts day-boat immediacy to catfish meuniere. As for the onion jam that bestows such majesty on the fried chicken livers, it has simmered six long hours. So look down, Thomas Stearns. If the fried green tomatoes with buttermilk dressing don’t inspire you to take up your pen again, the slice of lemon icebox pie will.

The Venice pop-up once known as Wolf in Sheep’s Clothing has found a home inside the Palihotel. Though permanent—and decked out in a Wes Anderson-esque animal motif—the bright tiled space feels at odds with the joint’s soulful Southern cuisine. Scruffy chef-owners Kris Tominaga and Brian Dunsmoor pull out every tasty trick in the Dixie cookbook to make sure you don’t care: black-eyed peas with ham hocks, fried green tomatoes with buttermilk dressing, chicken cracklins to dip in spicy vinegar. It more than works. With a West Coast farm-to-table focus, their food of the South becomes something else entirely. 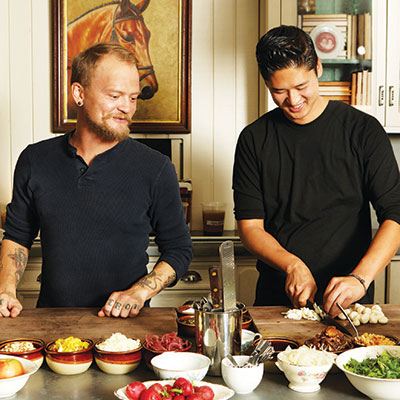