The kitchen where Steve Samson and Zach Pollack are busy tending the fires would be the focal point if there wasn’t so much happening on the plate. Cauliflower florets and cured lemon duel beneath a grilled mackerel scapece. An egg, sunny side up, cooks in a bowl of minestra country soup, chock full of wild mustard greens, just as it would in Umbria. Strewn over hand-rolled buds of maharrones pasta in tomato sauce, the Sardinian cheese Fiore Sardo adds a hint of sharpness, a modest indulgence, like a shepherd’s treat.

If American bacon were amped up to André the Giant proportions and infused with old-world class, you’d have porchetta. A common roadside treat throughout Tuscany, it has become a hallmark of upscale neo-rusticism across L.A. At Sotto they call it porcetto, and by any name, it’s damn good. The restaurant’s unabashedly earthy paean to pig meat is a glutton’s dream: fatty, tender pork perfumed with salt, myrtle, fennel, and garlic and encircled by a layer of gloriously crisp skin. Offered only at lunch, the delicacy comes as a sandwich on hearty grilled bread topped with vinegary arugula. That Umbrian road trip can wait.

Traditionally sipped after meals to aid digestion, amari, the bitter Italian liqueurs made from roots and herbs, are gaining prominence in L.A. restaurants. A well-trained staff and diverse selection are key to finding a quaff that suits one’s taste. Osteria Mozza has the largest collection, although the off-the-menu pours are usually offered to big spenders only. The program at Sotto shines because of its low barrier to entry. Zach Pollack and Steve Samson stock rare bottles from Italy, which are available off-menu to curious customers. Barman Julian Cox crafts amari cocktails—like the Bols Genever-based Brownsville—that are approachable for newbies and aficionados alike. » 9575 W. Pico Blvd., Pico-Robertson.

Arid, windblown, with the scent of thyme in the air, southern Italy is hardly what anyone would call bountiful. Instead of the buttery prosciutto, thick cream, and perfumed truffles of Piedmont and Emilia-Romagna in Italy’s prosperous north, below Rome that which is good must be coaxed from an unyielding landscape. What’s evolved is a direct cuisine built on potent flavors. A basement dressed in Edison bulbs and rough-hewn wood, Zach Pollack and Steve Samson’s Pico Boulevard restaurant channels a bedrock belief that glorious rewards can be drawn from the region’s spare larder. The pair, who worked together at Grace and O.C.’s Pizzeria Ortica, are completely attuned to the sensual austerity this food demands. The wild fennel minestra—freighted with greens and Calabrian chiles, a fried egg its sole protein—could be the breakfast of shepherds in Padre Padrone. Blistered Little Gems, a salad finished with pestle-pounded anchovies and garlic, veers toward modernity without straying from simplicity. The wine list that wends its way around the heel of Italy complements the food at every turn. A flinty Pugliangravina bianco cuts through the luxuriance of the grilled mackerel that’s accompanied by seared cauliflower and cured lemon scapece; a deep-colored primitivo adds a hearty counterpoint to the crackling on the signature pork belly porcetto that’s served with a few lightly dressed wild greens. The dish is a lyrical example of how Pollack and Samson are able to transform the cuisine’s indispensable modesty into moments of delight. In an age of more, Sotto is a timely reminder of the power of less. 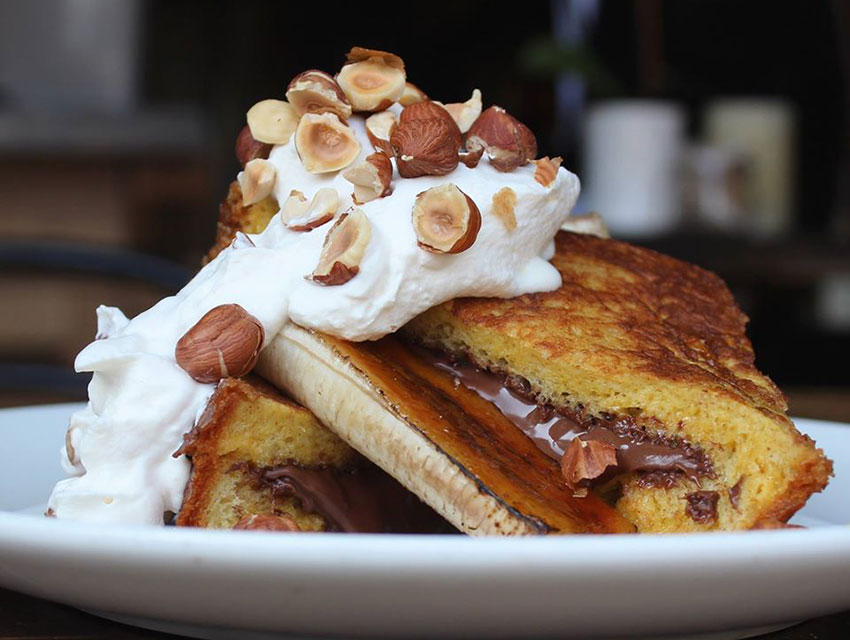