Whether you met at a church or on Tinder, Cliff’s Edge can propel a fledgling romance into full flight. Start with a drink at the indoor bar, where the soft, fuzzy lighting creates an intoxicating ambience (and we don’t mean from the alcohol). The acoustics lend themselves to quiet conversation, and you’ll be tempted to flirt the evening away in a dark corner. But consider exploring the restaurant’s multilevel patio, hedged in by greenery and festooned with strands of lights, to elevate the enchantment.

The terraced garden at Cliff’s Edge is a riot of bougainvillea and palm fronds anchored by the spreading limbs of a 70-year-old ficus tree. The tables seem to be there at the whim of nature, as if tendrils could easily shoot out from the plants and reclaim the space. The banquettes are strewn with cushions upholstered in vibrant paisley prints, and with dishes like a summery sour plum gazpacho, chef Vartan Abgaryan’s menu adds an element of fine-tuned excellence amid the encroaching greenery. Savvy Los Angeles diners know their patios (A.O.C., Sofi, Michael’s), each of which is site-specific in its own way, but Cliff’s Edge goes one step further by inviting us to take our time in what’s not wholly tamed.

Congrats! You’ve made it through the online dating checklist: decent phone convo, coffeehouse meeting, drinks at a local (but not so local that you’d be recognized) bar. Now it’s time for a romantic (but not too romantic) dinner at Cliff’s Edge. Silver Lake’s candlelit grotto recently brought on James Beard-nominated chef Benjamin Bailly (Fraîche, Petrossian), whose farm-fresh menu is tasteful but doesn’t punish the pocketbook. Encourage dialogue with a Bee’s Knees cocktail while slurping bivalve aphrodisiacs from the new oyster bar. Not working out? Hide your smart phone under a Moroccan pillow and begin the search for a new match.

The sprawling hillside patio at this Silver Lake hideaway lights up at night like the Swiss Family Robinson’s cafeteria. Look for small dishes of ricotta bruschetta topped with marinated grapes, savory pumpkin ravioli, and a perfect plate of sliced grilled sirloin and melted Gorgonzola. 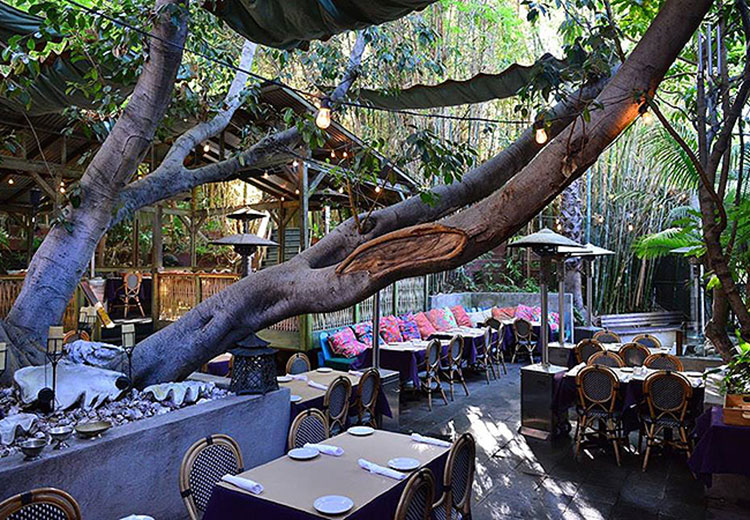