Home Dining Our Cosmopolitan Table: Authentic, Inspiring, and Better Than Ever 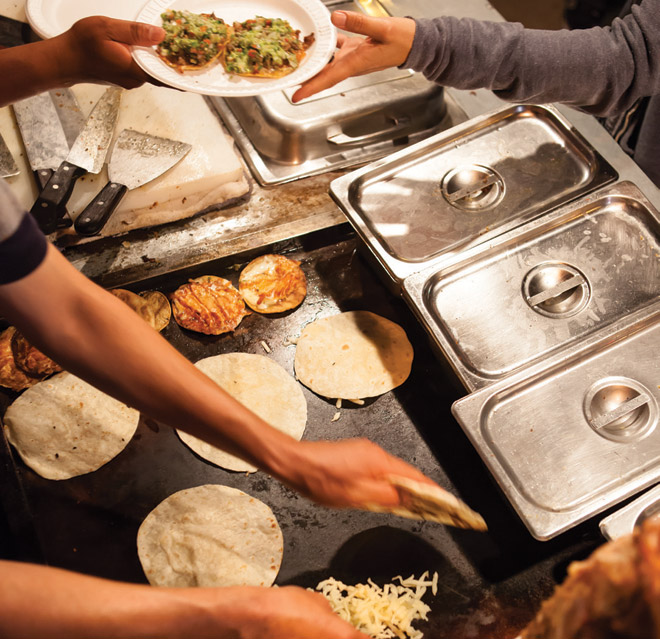 No city is home to as wide a variety of authentically executed ethnic cuisines as Los Angeles. This is one benefit of our much-maligned geographic sprawl. With room to breathe and thrive, communities can sustain the rendering of a dish in its gloriously unmodified form. That’s real beef tongue being grilled at Soot Bull Jeep on 8th Street, and the sizzling mass of brittle-skinned peppers piled over the belly bacon at Hunan Chilli King are just the way the habitués of the Valley Boulevard shop front like it. You can ask for fewer pods, but they’ll wonder why you bothered coming in.

Toning it down is what any number of cooks were once forced to do. The list of ersatz cuisines is long, ranging from column A-column B Chinese to combo-plate Mexican. Today we’re in a different place. The genuine has usurped the merely colorful, and the regional has supplanted the national. Boasting an amazingly high level of knowledge, Angelenos are ever ready to broaden their horizons. Today a single tweet can gather enough fressers to dispatch a whole-hog Filipino lechon.

That is the delicious moment we live in. From the vantage point of a Vermont Avenue griddle, where pupusas are stuffed with white flor de loroco petals, Los Angeles is a vast arena in which culinary traditions can be endlessly explored. And explore we do, creating bonds with each new dish to forge a unique paradox. The more differences we maintain, the more curious we become about one another. The clearer the distance between us, the closer to each other we are. The more divided our kitchens, the more united our city.

PLUS: 12 Tips for Navigating Our Ethnic Food Eden Like A Seasoned Globetrotter

1. Dutch
We love any cuisine that has French fries as a staple, but don’t go asking for ketchup. The Dutch prefer mayonnaise and even peanut sauce (really) for dipping their taters.

2. Egyptian
Embrace Egypt’s most popular utensil: bread. Pita and flatbread are used to scoop up bits of food and to sop up sauces, but they also turn kabobs and falafel into handheld meals.

4. Laotian
Cutlery and chopsticks are the mode of choice for many dishes in Laos, but to gobble the country’s omnipresent sticky rice, use your fingers. Just pinch off a portion, roll it into a ball, and pop it.

5. Ethiopian
Without getting into specifics, when eating the finger foods of Ethiopia, always use your right hand. The left hand is associated with, um, less appetizing acts.

6. Italian
The foam-topped espresso drink known as cappuccino is exclusively for a.m. sipping. Order one with dinner and be prepared to look like a buffone!

7. Hawaiian
We haole, or mainlanders, may not swoon over that blocky, shelf-stable product known as Spam, but Hawaiians consider it an everyday delicacy. One sure way to not get asked back to these parts? Scoff at the pink meat, or refer to it as “canned ham.”

8. Northern Vietnamese
When devouring pho, Hanoi’s famed noodle soup, the more noise, the merrier. Slurping your strands is not only OK—it’s good table.

9. British
Whoever advised “pinkies up” never knocked back some Earl Grey with a real Brit. Pinkies—and all your digits—should remain tucked.

10. Peruvian
No, your ceviche isn’t “underdone.” The Japanese influence on Peru’s cuisine shows in that country’s version of the fish dish, which is more raw (think sashimi) than its citrus-cooked counterparts in other Latin countries.

11. Hong Kong
Dim sum has so many rules, partaking of it borders on ritual. To wit:  Dine early (in Hong Kong the meal sometimes starts at 5 a.m.), leave the lid of your teapot askew when you’d like a refill, and tap the table three times to say thanks.

12. Israeli
Kosher cuisine traditionally separates meals that include dairy from meals featuring meat. While not all Israelis follow the Hebrew diet, play it safe: If you spy lamb, chicken, or beef at the table, don’t ask for butter with that bread.