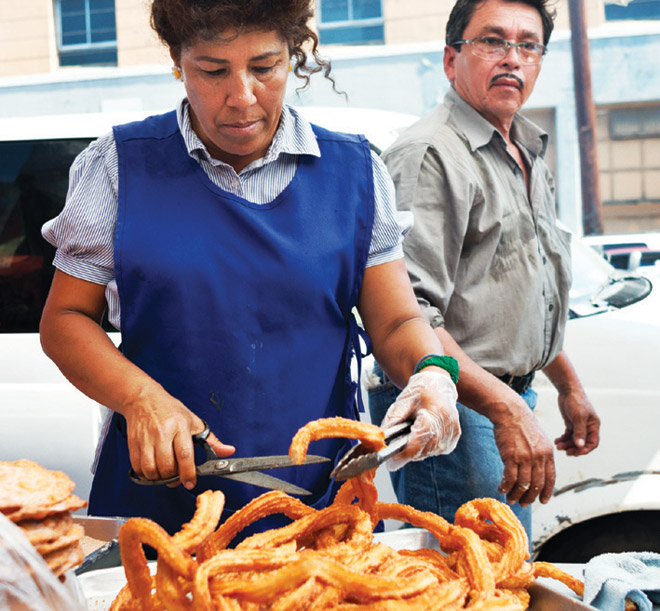 On weekends the stretch of Olympic Boulevard near Central Avenue known as Mercado Olympic is festooned with piñatas and roving Mexican vendors selling the edible wares of their native regions. The street is a traffic jam of families using baby strollers as battering rams while music stalls broadcast cumbias and merengue’s that assault your ears. It’s as though five blocks of Mexico City landed in downtown L.A.

Until plainclothes cops swoop in and begin issuing tickets to unlicensed slingers, that is. For the most part the vibrant bazaar is illegal. Nobody, especially shoppers looking to fuel up with a taste of home, seems to care. On the south side of the boulevard, cooks from Jalisco prepare that state’s moist and droopy tacos de canasta—or tacos steamed in a basket—filling them with molten pork skins braised in red Chile sauce. Covering another long table are a dozen or so stockpots full of Michoacán-style stews and guisados waiting to be stuffed into quesadillas by the cooks at La Quesadilla Loca, which despite having recently opened a brick-and-mortar restaurant, keeps its spot at the Mercado.

On the less hectic north side of the street is the city’s best Pueblan cuisine: herb-laced blood sausage and diamond-shaped masa boats, called tlacoyos, mixed with ricotta-like requesón cheese and pork lard-fortified refried beans. Bopping back and forth across the boulevard, you’ll encounter delicacies from Toluca—artisanal chorizos and pork cutlets fried to order—as well as blue corn quesadillas with real huitlacoche, or corn fungus, like the ones found toasting on carts in Mexico City. Amid the smell of frying lard and the sound of knives cleaving meat, this outlaw crew of sidewalk culinarians forms the most authentic quarter-mile of Mexican street food in the country. Lucky us.