Home Philanthropy A Whole Lotta Sole: Comunity Pays It Forward With Every Shoe They... 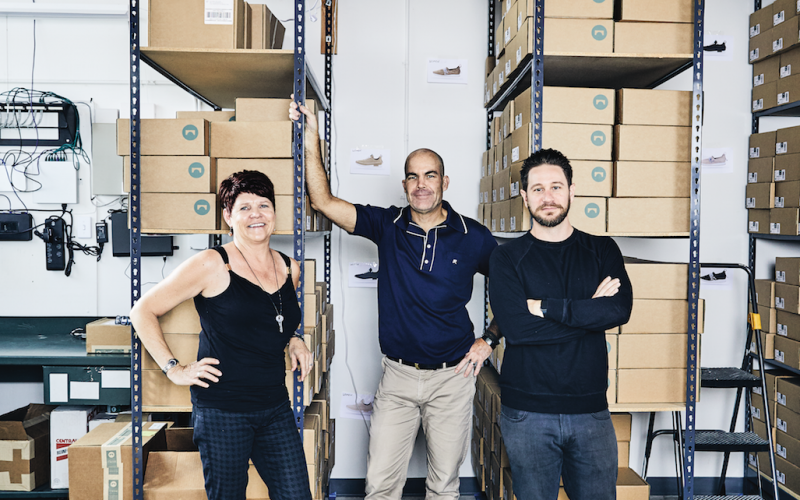 On one of the burgeoning commercial corridors of downtown L.A.’s Arts District, blocks away from the homelessness of skid row and the sewing machine-filled factories of the Fashion District, a start-up is trying to bridge these disparate worlds. It’s not an app or a social network or an underfunded nonprofit but a shoe company called Comunity. The new headquarters and showroom feature the company’s handcrafted shoes, which are manufactured by local craftspeople and sold directly to consumers both in-store and online. A portion of the proceeds is donated to organizations working on some of the city’s most entrenched issues, from homelessness to poverty to underserved schools. As the name suggests, Community aims to use business as a local force for good.

Established earlier this year (with the help of a Kickstarter campaign) by alums of the buy-a-pair, give-a-pair shoe company Toms, Comunity donates $10 for each $160 to $185 pair of leather sneakers sold. It’s a relatively new business model in which both the customer and the company commit to playing an active role in supporting socially engaged organizations. “That was the takeaway from Toms: We have the power to do something,” says Sean Scott, the former chief shoemaker at Toms, who cofounded Comunity with his wife, Shannon, and business partner Ryan Gumienny. “And there’s a lot that we can do in our own backyard.”

To maximize its philanthropic efforts, Comunity has partnered with three local nonprofits: the People

Concern, a social services agency that helps people transition out of homelessness and poverty; Youth Mentoring Connection, which pairs at-risk youths with adult mentors from the community; and Street Poets, which uses poetry and music as tools for encouraging expression in schools and youth-probation programs.

John Maceri, executive director of the People Concern, likes Comunity’s approach because it creates a collective impact. “It’s an easy way for both businesses and their customers to give in a way that doesn’t require much effort,” he says. “Customers are generally more loyal to businesses that give them an opportunity to support social responsibility.”

Few blocks southeast and across the L.A. River from Comunity’s showroom, eight cobblers sit at a wide worktable, hammering soles and stitching strips of leather as they finish up Comunity’s most recent orders. They’re part of the 85-person team at Lalaland, a shoe and handbag factory that works with small direct-to-consumer brands like Comunity as well as global brands. Lalaland has put together more than 3,000 pairs of shoes for Community so far, with employees laboring over the intricate hand-stitching and embossing HAND CRAFTED IN DTLA on each instep.

The Scotts and Gumienny were attracted to Lalaland because of its focus on handmade manufacturing processes. “We feel very strongly about rebuilding the manufacturing industry in the U.S.,” says Shannon. They also liked that Lalaland pays workers a living wage—an average of $14 per hour. “The labor is the most expensive cost of our shoes,” Sean says. “That’s how it should be.” He argues that cheap overseas labor has distorted consumers’ perceptions of what it takes to create a high-quality product. Lest anyone think twice about where their money is going when they buy a $180 pair of shoes from Comunity, the company breaks down the pricing on its Web site. Minus the $10 donation, another $10 for shipping and packaging, and the company’s $81 revenue, each pair of those shoes costs $79 to manufacture, including materials and labor—about three times the cost of a similar product produced in Asia.

Orders are just starting to roll in, so there isn’t a reliable estimate of how much money the company will be sending to its partners. When the 3,000-plus pairs of the shoes sell, more than $30,000 will end up in the hands of those organizations. It’s perhaps a modest infusion of cash, but Comunity’s founders hope it will be the start of ongoing contributions—from them and from their customers. “People want to help,” Sean says. “We’re just trying to give them a pathway.”