Home Philanthropy The Power to Redeem 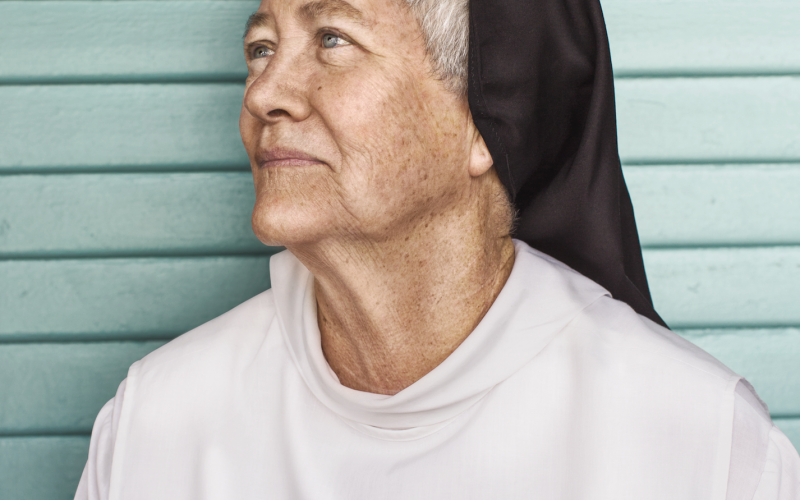 Sister Mary Sean Hodges, who wears a long flowered dress in lieu of a habit, paces in front of three men serving life sentences at the state prison in Lancaster. An enclosed catwalk with gun slots for the guards hovers above them in the dingy gym. Printed on the walls, in bright red letters, is the admonition NO WARNING SHOTS FIRED IN THIS BUILDING. The men sit on metal chairs in front of 30 other prisoners, all lifers who have yet to appear before the parole board or who have gone before the board and were turned down for release. Sister Hodges, a 77-year-old with vivid blue eyes and short silver hair, is here to prepare the inmates for their next hearings. Turning to a man named Raymond, she asks, “Can you name a moment of transformation in prison life that led to change?”

At 53, he has been incarcerated more than 30 years for murder, his appeals for parole denied numerous times. “I told my mom a while back that I got into trouble again, and they added six more years before my next parole hearing,” he says, the words CDCR PRISONER stenciled in big yellow letters on his blue shirt and pants. “She asked me what happened, and I told her it was about the homies. She said, ‘When’s it going to be about me? The homies didn’t get you a lawyer. The homies don’t send you money for your canteen. The homies don’t write you.’ It made me look into who I am.”

Sister Hodges takes a step toward Raymond. “What’s the next thing you did?”

The mock parole board hearings like the one at Lancaster are just a portion of Sister Hodges’s unique prison ministry. The preparation program, called Insight, focuses on helping inmates recognize the reasons for their crimes and express personal change. But her overarching Partnership for Re-Entry Program, founded in 2002, also takes on the bigger challenge of looking after the lifers if they’re granted parole, guaranteeing housing and other support upon their release. At the time Sister Hodges opened her first home for the newly released convicts in 2008, there was nothing else like it anywhere in California. By 2011, there were five PREP homes, all in South L.A.

The creation of her program couldn’t have been more fortuitous. For decades California inmates serving life sentences with the possibility of parole were rarely released. But with new laws—as well as a state Board of Parole Hearings and a governor responsive to these changes—lifers are walking out of prisons in record numbers. About 3,000 have been approved for parole during the tenure of Governor Jerry Brown, compared with the two released by Gray Davis during Davis’s four-year gubernatorial term. Now inmates in 34 California prisons, along with those in 10 other states, participate in PREP.

Sister Hodges spent almost 40 years teaching math, science, and religion and 13 years serving as a principal in Catholic schools throughout California. When she turned 60, she decided to leave teaching, but she wasn’t ready to retire; she wanted to find another way to serve. At a spirituality retreat on Long Island, she met a sister with a prison ministry who invited her along to meet inmates.

“During my visits, I got to know some lifers, and I could see they were different from those who go in and out of prison many times and don’t grow at all,” says Sister Hodges. “I could see that many had matured, and I was convinced if they were given a chance, they wouldn’t return to crime.” Research supports her hunch: A Stanford study found that of 860 murderers paroled between 1990 and 2010 who were tracked by the university, only 5 committed new crimes and none of those 5 were convicted of murder. Criminologists attribute this partly to the average age—the mid-fifties—of the lifers being released.

Later, after Sister Hodges returned to California, the director of the L.A. Archdiocese’s Office of Restorative Justice offered her a position to create a reentry program for former inmates. Through her contacts with Catholic chaplains, she began meeting with lifers in prison, always in a secure room and with armed guards present. On her first visit to a prison, Sister Hodges, a buoyant woman accustomed to greeting people with a hug, went to embrace an inmate with whom she had been corresponding. She didn’t know that physical contact with inmates is forbidden, and the guards were quick to enlighten her. “I was never put in a position where I felt I was in any danger,” she says. “So I got to know lifers in that safe setting. As a result, I could hear their stories, get to understand their difficult backgrounds and where they came from.”

Early in her ministry Sister Hodges determined that a key cause of recidivism was a lack of housing. The first PREP facility she established housed eight newly released prisoners as they attended self-help meetings, looked for work, and received job training. Nowadays the parolees spend one to two years “transitioning” into society before finding their own apartments or returning to their families. Sister Hodges believes that some of her insight into what a lifer faces comes from one of her brothers, an alcoholic who was in numerous rehabilitation facilities and served time in prison. “After he left a program, he kept going back to drinking,” she says. “I realized that if an alcoholic returns to the same situation, he’ll go back to alcohol. It’s the same thing with parolees.”

In addition to the Insight training, she created programs that deal with domestic violence, parenting, anger management, and gang involvement. The instruction is run out of a small cluttered room in a blue Craftsman house in South Los Angeles. A wood sign above the main entry reads BEACON OF HOPE. Nine desks are jammed into the small office where Sister Hodges and eight ex-lifers sift through the coursework that’s been mailed in, one lesson at a time, from inmates. The men either approve the work or offer feedback. When a lifer completes 20 lessons, he receives a completion form to show to the parole board.

One former program coordinator, Alfredo Cruz, served 29 years after stabbing a man to death at a party. His parole was denied nine times. “In prison you learn not to show emotion because showing emotion is considered weakness,” says Cruz. “But the board sees this and thinks you’re callous. Through the program I was able to talk about thoughts and emotions I’d buried for decades.”

Sister Hodges helps lifers on their parole appeals not as a way to manipulate the system, she says, but to change the way they are living in the present and to prepare them for the future. Some prisoners she knows are too dangerous to be released, “but they still need help,” says Sister Hodges. “So I try to provide programs for them. They can still grow in prison, whether they’re going to get out or not.”