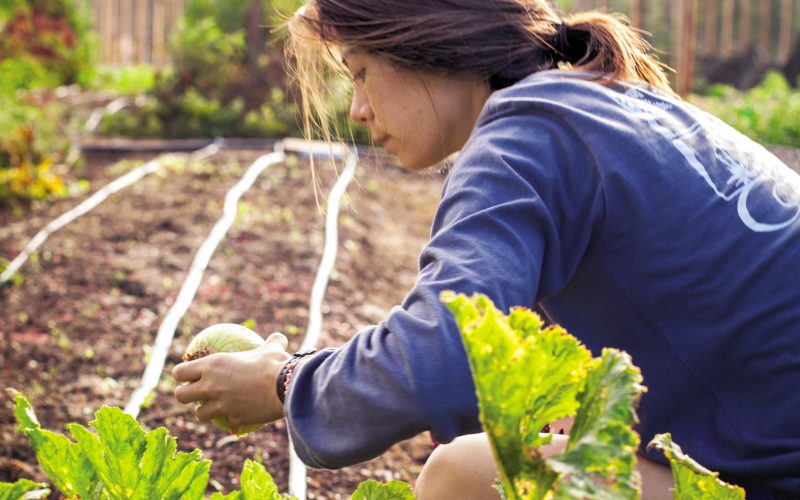 Eight miles from downtown, amid the warehouses and factories and railroad tracks of Bell, Katie Lewis arranges the winter vegetable crop at GrowGood, the farm she manages here. This isn’t a communal plot; it isn’t really a commercial one either. GrowGood harvests food for people who are in no position to sort through the produce at the Santa Monica Farmers Market. Spread over one-and-a-half acres of U.S. Army land that a few years ago was practically devoid of biological life, its dozens of varieties of vegetables and herbs and 60 fruit trees serve as the engine of GrowGood’s mission: sending its harvest to the large homeless shelter across the parking lot.

The farm was founded by Andrew Hunt, a technology entrepreneur, and Brad Pregerson, a city prosecutor. Pregerson’s grandfather, U.S. Circuit Court judge Harry Pregerson, helped open the shelter 28 years earlier in a converted U.S. Army hangar. Time as a volunteer in the kitchen inspired the younger Pregerson to find a way to get more fresh produce to the shelter. What’s ripe is picked, weighed, rinsed, and wheeled in a green wagon the 150 steps to the kitchen of the Salvation Army Bell Shelter, temporary home for up to 350 people, many of them military veterans. In late summer the wagon held six or so varieties of tomatoes, cucumbers, eggplant, lettuce, hot and sweet peppers, and several kinds of squash. The farm will top 7,000 pounds of food going into the kitchen this year.

GrowGood is an earnest little place, populated by six employees and a dozen volunteers. Shelter clients sometimes volunteer at the farm, and they can apply for a job training program.

I’ve been working there for about a year now, and while I make no pretense of being unbiased, after spending 16 years at the Los Angeles Times as a writer and editor, I also know a good story when I see one. Like just about everyone who works at the farm, I began as a volunteer who knew a bit about the theory of what was going on there but almost nothing about getting it done. Weeks—and many mistakes later—I got hired on as a farmhand. Now I’m the executive director of the nonprofit that runs the farm and its programs, including a move this fall to sell some food at a farmers’ market to support our work.

GrowGood isn’t necessarily a model that can be applied on a wide scale, but for me it embodies the power of this kind of work and how much seemingly small-scale efforts can enrich the lives of the people on both ends of the equation.

The kitchen opens at 2:30 a.m. and uses GrowGood’s produce for the salad bar, stir-fries, and other dishes. But it’s not uncommon to see people piling their trays with chips or white bread instead. Farming is hard. Persuading people to change their eating habits may be harder.

To attend to more than just shelter clients’ bellies, Jayne Torres, a master gardener and an original GrowGood employee, offers wellness classes in a clearing surrounded by native plants. To help sequester carbon, the land isn’t tilled; weeds are snipped flush with the ground and chopped by hand to create mulch. Compost is made, which requires monitoring temperatures as it “cooks.”

“The way that farming started to make sense for me—not as a fad or something cute—is that it’s integrated into people’s lives in an urban setting,” Lewis says. “People are part of the ecological life we are sustaining here.”

GrowGood operates on donations and grants but is working to become a sustainable social enterprise, selling unusual crops and microgreens and venturing to a farmers’ market or two. An early customer of the business side is chef Eduardo Ruiz, food and beverage director at the hospitality company blvd745. He bought GrowGood’s Malabar spinach for one dinner. Ruiz says he loved experimenting with something no one else had: “Do you know how many chefs fight for the cilantro flowers at the farmers’ market?”