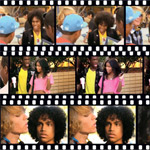 For Mario Van Peebles, making movies has often meant probing the lines that divide us as well as working with family. As a kid, he appeared in Sweet Sweetback’s Baadasssss Song, the 1971 film his father, Melvin Van Peebles, directed about black power, Twenty years later Mario directed and costarred in New Jack City, which chronicled the rise of crack cocaine in the black community. This month, two more decades later, the father of five multiracial teenagers has a new film opening that they helped inspire: We the Party, which is set in a fictional L.A. high school. “My wild bunch started begging me to let them go to some all-age underground clubs,” he explains of the film’s evolution. “I said, ‘Hell, no. Unless you take me with you.’ I got a crash course in teen culture.” He was surprised how racial lines are blurring between teens, while economic ones are becoming more pronounced. “Kids are, simultaneously, incredibly informed and yet woefully ignorant,” he says. “Some are dropping out, others see smart as the new gangsta. This is the first generation to come of age during a black presidency, but for them it’s not historic—it’s just the norm. Anything seems possible, both good and bad.” In one scene a white skateboarder tries to pick up a black girl, who’s in the rap group Pink Dollaz. “When I called ‘Action!’ she and her crew ad-libbed, ‘Now what’s this nigga tryna do?!’ The social flip on that was crazy. The sista from the hood was referring to the wigger from Venice Beach as the N-word. I knew there would be blowback, but I wasn’t going to water it down.”