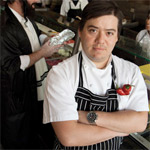 How Fusion Cuisine Reaches New Heights in Katsuji Tanabe’s Kosher Kitchen
Whenever chef Katsuji Tanabe cooked a Mexican specialty at the fancy kosher steak house Shiloh’s, diners would ask for more. So Tanabe opened his own place, Mexikosher, along Pico’s kosher corridor in July. Tanabe, 31, isn’t Jewish—his father is Japanese; his mother, Mexican. He enlisted the help of a kosher supervisor as he set about making dishes that tasted traditional, even though they’re not. Carnitas? He makes them from beef brisket cooked in kosher duck fat. Bacon? From beef bellies. Sour cream? It’s tofu based. Tanabe says that while 50 percent of his patrons keep kosher, the other half simply come in for the deliciousness. The result: All kinds of people gather under the suspended piñatas. “You get to people’s hearts through their stomachs,” the chef says. To which we say, Mazel tov. Finding Harmony at Robin Hart and Dej Sriampai’s Valley Gym
Three years ago personal trainer Robin Hart, who is white, and her husband, Dej “Nokweed” Sriampai, who is from Thailand, opened At One Fitness in a North Hollywood warehouse with the hope of bringing righteousness to the gym. “We wanted to create a place where people could build not only their bodies but their character,” says Hart. Students who are white, black, Latino, and Asian come here for muay thai-style kickboxing. Raised by monks, Sriampai is an instructor and ring official whose calm demeanor serves as the best advertisement for the martial art. “Our motto is, If your body is strong, then your brain is sharp and you make better decisions,” he says. “We teach how to be humble and peaceful.” And to say thank-you because, as Sriampai notes, “in martial arts you are no good without your partner.” Hart nods in agreement. “You need each other to develop yourself.” Music is Just One Reason Generations of Chicanos Tune in to DJ Art Laboe
Six nights a week the voice of Art Laboe—and his soulful music choices—can be heard on L.A.’s Hot 92.3 FM and 15 other stations in four states. The 86-year-old DJ is Armenian, but his program, The Art Laboe Connection, is huge with African American and Latino listeners, not to mention everyone else. That’s because he’s the king of the “oldies but goodies” (a phrase he invented) and was an early champion of (and friend to) black musicians like Chuck Berry (below, right) and Etta James. Laboe, who ranks number one on the “Stuff Chicanos Like” blog, is also beloved for opening up his show to old-school dedications. “If you have a song that takes you back 20 years, it transports you,” he says. “Nostalgia is a powerful tool.”