Home Fashion The Story Behind our Fashion Feature with Game of Thrones Star Nikolaj... 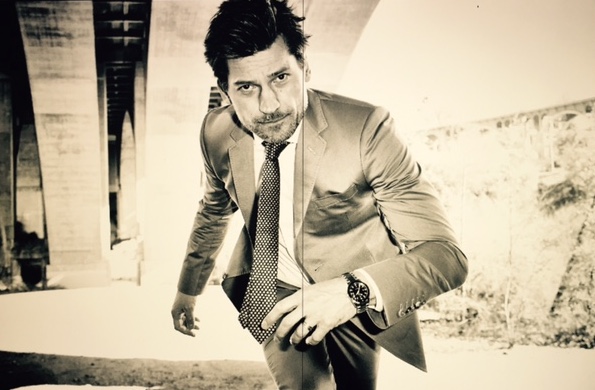 Full disclosure: I am a huge fan of HBO’s Game of Thrones. And by huge I mean I’ve watched every episode at least four or five times and I nearly named my puppy after a direwolf, but Nymeria didn’t stick. So when we booked actor Nikolaj Coster-Waldau (Jaime Lannister) for our men’s spring fashion shoot (March issue, on newsstands now!) I was as giddy as I was when King Joffrey was poisoned.  Once our talent was booked we began brainstorming concepts and locations for the shoot and decided not to play up the Game of Thrones angle—no Gothic backdrops, no stone castles. Instead, we looked for a modern space, something that was masculine, could give us a monochromatic look, and referenced, loosely, Casterly Rock, the home of Coster-Waldau’s character. Photo editor Amy Feitelberg and I were lucky to have been introduced to Carole Soucek King, who resides with her husband Richard King in a Buff and Hensman home under the austere Arroyo Secco bridge in Pasadena. She let us have the run of the place for the shoot. The next challenge to conquer: the clothes. On GOT, Coster-Waldau wears a suit of armor as a knight in the Kingsguard, and I thought it would be fun to see him in suits of the non-steel variety. Plus, suits were all over the spring runways. I settled on a color palette that is very muted, lots of beige and gray-blue—and believe it or not fellas, lots of double-breasted styles, too. Instead of a set-in-stone narrative, we let photographer Eric Ray Davidson work his magic and snap a series of portraits that utilized Coster-Waldau’s acting skills. It was a blast watching Davidson call out, in rapid fire, an endless series of directions and Coster-Waldau perform them. The behind-the-scenes slide show above offers a sneak peek at the fun.