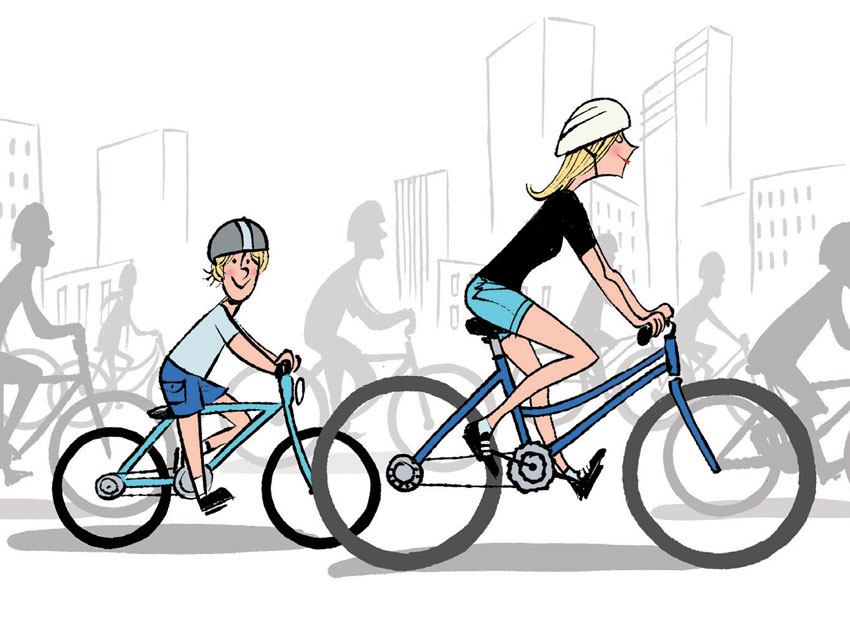 My family often visits Disneyland. The Anaheim theme park was a touchstone of my childhood, and I’m ensuring that it plays the same role for my ten-year-old son. On our most recent trip, I hadn’t taken three steps on Main Street before the Magic Kingdom’s barbershop quartet cruised past on a single bicycle. The Dapper Dans, as they are known, were wearing their signature straw boaters and candy-striped vests. Their ride was a custom Schwinn built for four—a design commissioned in the ’50s by Walt himself. Watching the tires spin and recede into the distance, I smiled in the way people do when they realize they’ve come full circle.

Disneyland happens to be among the chief inspirations for CicLAvia, which since 2010 has temporarily transformed miles and miles of local streetscapes into an alternative Los Angeles where car traffic is forbidden and cyclists, skaters, and pedestrians rule. Granted, it’s a roundabout, shall we say, inspiration—CicLAvia cocreator Aaron Paley had learned that Bogotá routinely closed its streets to traffic and wanted to produce a similar event here. The first time he proposed it was in the pages of this magazine in 2009. But as Paley explains in our Speak Easy interview this month, the vibrancy of Disneyland’s carless thoroughfares made a profound and early impression on him. They were the antithesis of the traffic-heavy avenues of his youth—he grew up in the San Fernando Valley, as I did—and the theme park held out the promise of a city where sociability was prized above all else. When he was 13 and visited Europe for the first time, he thought, “This is like Disneyland.” Now he’s made L.A. more like it, too.

I’m equally fascinated with public spaces. Whenever I travel, at home or abroad, I first seek out the Midwestern town square or the Italian piazza. I’m drawn to their energy, the people-watching, the sense of place—all reasons I’m enamored of CicLAvia. It’s one of the rare events that connect Angelenos, no matter how high-tech their bikes or brawny their biceps. The uninterrupted traffic unleashes a river of humanity, sometimes 100,000-people strong. The only downside is keeping up with my boy, who despite riding a vintage single-speed, leaves me in the dust.

Paley belongs to a new class of Los Angeles visionaries who have tapped into the city’s diversity and elasticity (as we highlighted in our last Speak Easy, with landscape architect Mia Lehrer). They prove that this “new city,” as Paley puts it, is bursting with creativity. “The Happiest Place on Earth”? No way are we wresting that title from Disneyland anytime soon, but thanks to civic impresarios like Paley, I’m seeing a future in which we’re better at confronting the city’s problems and expanding its possibilities. Tomorrowland doesn’t seem so far away.