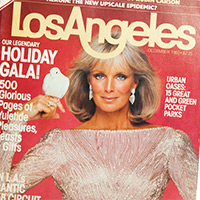 As editor-in-chief, I always hope that every issue of this magazine will eventually become an artifact. This month we explore how the 1980s fundamentally changed L.A. For inspiration I flipped through the 120 issues from that decade in our archive. Karma Chameleon, those magazines were huge! If our job is to reflect the city back to itself, you could learn a lot about the L.A. zeitgeist from the covers alone. A few takeaways:

The U.S. was in a recession, but not L.A. magazine.
From ’80 to ’82, the country was sweating the deepest downturn since World War II. Los Angeles magazine, however, was hardly pinched: Itwas awash with ad pages and cover lines for stories like “Intoxicatingly Lavish Home Bars” (February 1980). In September 1981, Dynasty’s Linda Evans posed with a gold brick (it was candy, but still) beneath the headline “Secrets of L.A.’s Filthy Rich.” (Two years later she returned for the 496-page “Biggest Issue Ever” pictured here.) The magazine did acknowledge that something was financially amiss in September 1982 by running the feature “Bankruptcy Chic,” illustrated with an image of Dyan Cannon decked out in Van Cleef & Arpels jewels and grasping a fake $1,000 bill.

No trend was too trivial.
Let’s start with the “Gourmet Bread-and-Water Diet (It Works!)” from the January 1984 issue. I’m also intrigued by “L.A.’s Best Potpourri Shops” from December 1989. They must have smelled like money.

This was the age of celebrities awkwardly holding props.
At the magazine’s request (sorry!), Valerie Bertinelli straddled an ice sculpture in the shape of the Hollywood Bowl while fondling a saxophone (June 1981). Joan Rivers wrestled with a ginormous paintbrush (November 1982). Robin Williams shook a plastic pineapple like a marimba (June 1986). Clearly helicopter publicists did not yet exist.

…and raised many a glass.
Orson Welles toasted with a champagne flute in August 1981, and Jack Lemmon paired a taco with a glass of vino in August 1982. Ah, for the days of wine and rosebuds, when two of cinema’s finest actors didn’t mind shilling for a restaurant guide.

’Twas the dawn of the tell-all.
Maybe it was because of the rise of the National Enquirer, but folks were having a hard time keeping their mouths shut in this town. “Offspring of the Super Rich Tell How They Survived ‘Having It All’ ” (November 1985) was followed by “Mothers of the Famous Tattle on Their Kids” (May 1986). Both were preceded by “Housekeepers of the Famous Tell All” in May 1981. (Hopefully they were the same women featured in the October 1980 shocker, “Maid Robberies: How a Local Ring Was Broken.”)

We got it wrong more than once.
Predictions on the cover are dangerous: “Mayor Zev? Better Believe It!” (November 1986—and you’d better not, though Mr. Yaroslavsky is such a tease); “Why Metro Rail Simply Won’t Work” (January 1984—let’s ride the Expo Line back to the past and flip that writer the bird); “The Manhattanization of Los Angeles: Why Vertical Definitely Isn’t Turning Out Better” (February 1985—we had no choice but to build up).

Some questions, meanwhile, are timeless.
In September 1983, we asked: “Downtown’s Astonishing Revival: Can It Work?” It’s still working for us as a cover subject 31 years later (see last month’s issue). The celebrities holding weird stuff? Not so much. In both cases, I’d call that progress.