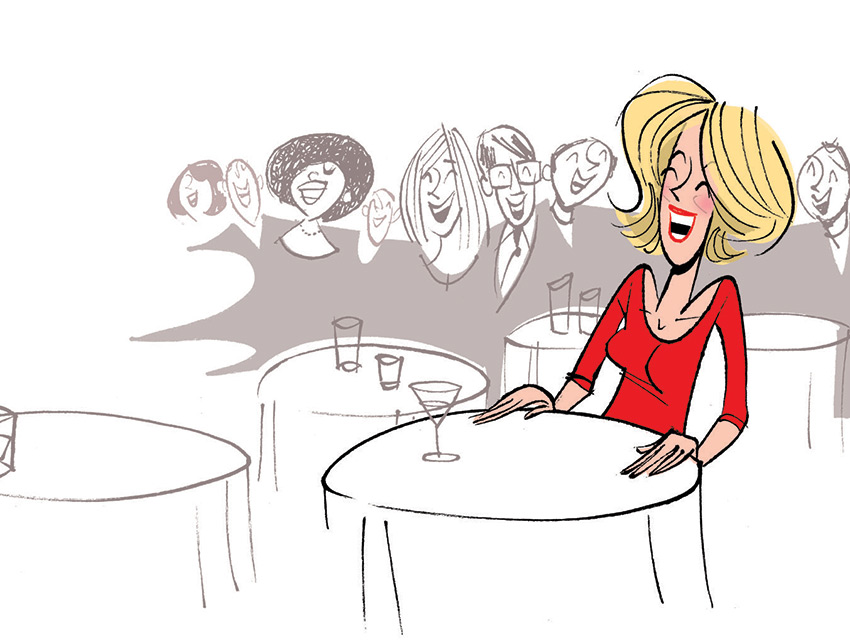 On a Thursday in June, I called my husband and suggested a spontaneous night out at our local comedy club, the Ice House in Pasadena. I didn’t know who was on the bill, but I needed some mirth to counterbalance a long week. Luckily for us, former Saturday Night Live star Dana Carvey was headlining. Not an hour after leaving the office, I found myself stageside at a tiny table. I laughed so hard during the warm-up act that I did a full-on martini spit-take; when Carvey came out and nailed one masterful impression after another, my husband nearly hyperventilated. Sir Paul McCartney explaining Internet trolls to John Lennon particularly stood out. In the video below, Carvey does a similar bit that makes Bill Hader buckle over.

Making people laugh can feel so good, it hurts. I still remember the first time I had an audience in my clutches. I was ten, providing the between-act entertainment at my elementary school talent show in North Hollywood. My shtick was to re-create popular commercials of the day, including one for Enjoli perfume that was omnipresent on the tube. Decked out in my great-grandmother’s fur stole, I shimmied across the stage while belting, “I can bring home the bacon, fry it up in a pan, and never, never, never let you forget you’re a man.” During that last line, I pointed to one random (and startled) dad in the front row and winked. I’d never been a bashful child, but after the audience’s laughter enveloped me that day like a fuzzy blanket, I was hooked.

By the time I was enrolled in a performing arts high school, I showed a clear preference for comedy over tragedy—Medea doesn’t generate a lot of yuks among tenth graders, and I loved how a cackling audience radiated happiness. Is there a better antidepressant than the type of deep belly laughs that produce streaming tears?

When I chose a career in journalism over one in theater, I learned about the toll those jokes could take on the people who delivered them for a living. I’ve interviewed enough comedians now—including 25 alumnae of the Groundlings for a story I wrote about the Melrose Avenue comedy troupe—to realize that they are among the most brilliant people you will ever meet. They can also be some of the most broken. It’s a screwy life, this business of making other people laugh, and it’s a life that Kliph Nesteroff knows well. The Canadian-born comedian immigrated to Los Angeles, the country’s capital of guffaws, to immerse himself in the stories of jesters and jokers from Moms Mabley to Shecky Greene. In our November issue hitting newsstands, RJ Smith profiles Nesteroff, whose book on the history of comedians is due out November 3.

As for me, I’m glad I left the job of entertaining the troops to the pros. The world needs humorists now more than ever, so don’t forget that it’s our duty to offer them support. I’ve bought tickets to see Don Rickles in January. I’m already giggling.

Comedy Legend Don Rickles on the Art of the Insult

Kliph Nesteroff Is the King of Comedy Lore