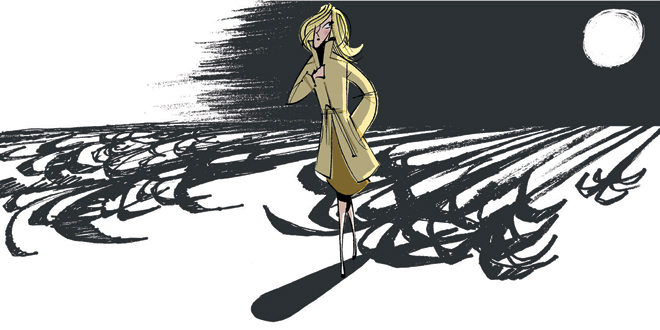 My uncle Mel was on a Manson family hit list. In 1975, four years after Charles Manson and three of his followers were convicted of first-degree murder, a policeman knocked on Mel’s door to deliver the news. Several members of the infamous cult were targeting people who were polluting the earth, and my uncle’s work as a Disney executive who helped develop the parks had put him on the list. At the time I happened to be staying at his ranch house above Lake Hollywood while my parents were away on vacation. Uncle Mel, a hard-bitten Texan, at least gave the appearance of being unfazed. I was terrified. I had been born a week after the Tate-LaBianca murders in 1969. The monster that appeared in my nightmares wasn’t some mythic bogeyman; it was Manson, with his wild eyes and that swastika carved into his forehead. Now here I was, stuck in an isolated house in the hills with my uncle’s ineffectual pug, Max, for a guard dog and the monster’s minions creeping up the driveway.

Nothing came of the threat, but the city spawned new devils to feed a child’s nightmares. At recess in elementary school, a group of us shuddered over each new grisly detail in the Hillside Strangler case. By 1984, it was the Night Stalker we were sure would get us, crawling through windows and mutilating people across L.A. It felt as if the city was teeming with wackos. I knew from history books that households had once huddled together to listen to radio dramas; in our house we cozied up to our RadioShack police scanner, sometimes jumping into the station wagon to chase down a squad car. There were times when the crimes came to us: Our house was burglarized, a couple of our cars disappeared (joy rides, chop shops), and in 1997 our Bank of America branch, where I’d opened my first savings account with a check for my seventh birthday, was the target of the most violent bank robbery in U.S. history.

You can learn about that North Hollywood shoot-out in our July issue. You can also read about unsolved murders, arsonists, gang wars, sinister hotels, homicide detectives, shoplifting, and more: For the first time we have devoted our entire feature section to the subject of crime. The dichotomy of the city—all that darkness drenched in all that sunlight—fascinates us so much that this month we are also launching a crime channel here at LAmag.com that includes an archive of the many long-form stories we’ve published about acts of violence both well known and obscure. After reading this issue you may be more inclined than ever to keep your windows sealed shut. Truth is, crime is much lower these days than when I was a kid. But old habits die hard: I’ve kept my house locked tight since I was old enough to reach the key.

Reflecting on the Timeless Mystique of Malibu