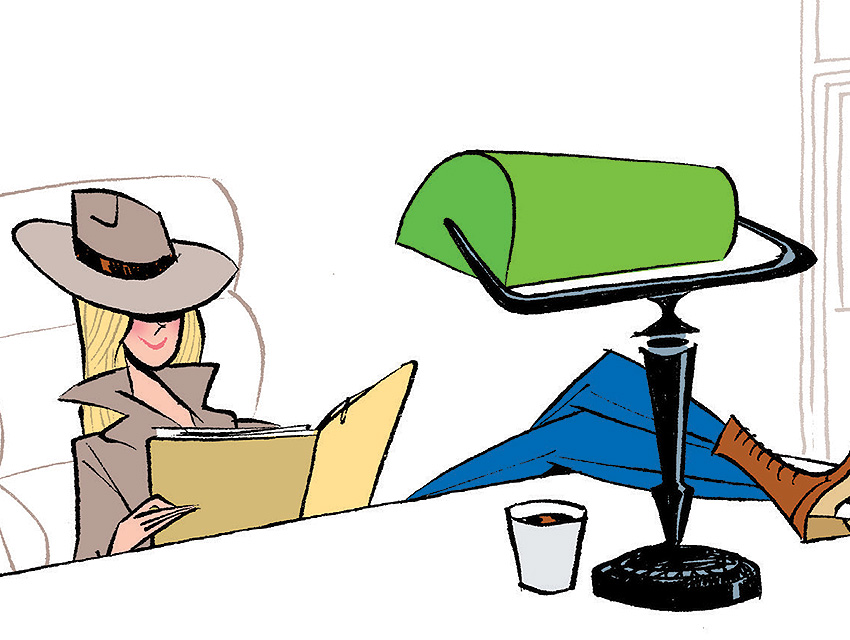 But for my aversion to gore, guns, and human misery, I might have made a damn good detective. Or at least a well-versed one. Crime stories, whether gleaned from fiction or culled from real life, draw me in with equal parts intrigue and angst. My gumshoe education began with Saturday morning marathons of Scooby-Doo. Watching the cartoon about four teenagers who solved mysteries with help from their bumbling Great Dane was a childhood fixation. Bundled under a blanket before anyone else was awake, an overflowing bowl of Cocoa Pebbles perched on my lap, I fancied myself cheek by jowl with Shaggy and crew, trudging through creepy corridors and dark tunnels with my flashlight to help flush out the perp.

This naturally led to a long period of consuming stories featuring the boy sleuth Encyclopedia Brown in the backseat of the car and, eventually, to setting up my own detective agency when I was still in elementary (my dear Watson) school. From the outset the enterprise suffered from a lackluster advertising campaign, which was limited to a single poster my best friend and I tacked onto a telephone pole in her neighborhood offering our confidential services. (I’m still waiting for my first case, if you’ve got one.) Encyclopedia Brown gave way to Raymond Chandler and Patricia Highsmith on my bookshelves, Scooby-Doo to Cagney & Lacey and Prime Suspect on my television set.

Detectives make for such compelling, complicated characters. It’s their nature to question, well, everything. I get that. I delight in puzzles and those details others may overlook. The act of taking something apart, conducting a forensic examination of the pieces, and then stitching them back together until they form a different whole explains why I love editing. Like detectives, journalists are fact seekers. We have to sniff out fallacies and demolish commonly held assumptions before we can begin to give a story structure and meaning. When assembled, what do the facts tell us? Do they create a plausible narrative?

In this issue editor-at-large Amy Wallace takes on one of the biggest stumpers of them all: Who killed Benjamin “Bugsy” Siegel? The mobster who helped found modern-day Las Vegas was shot to death in Beverly Hills in 1947. Amy (who’s such a dogged reporter, we should call her Detective Wallace) found a family who claims they knew the shooter. When one door opened in the story of this infamous unsolved case, another shut. This only made Amy dig deeper. Her piece joins the canon of top-notch crime yarns we’ve published in this magazine, which are such a part of our modus operandi around here that we’ve created a channel for them at LAmag.com. For that you can thank a cartoon Great Dane—and Shaggy, too.