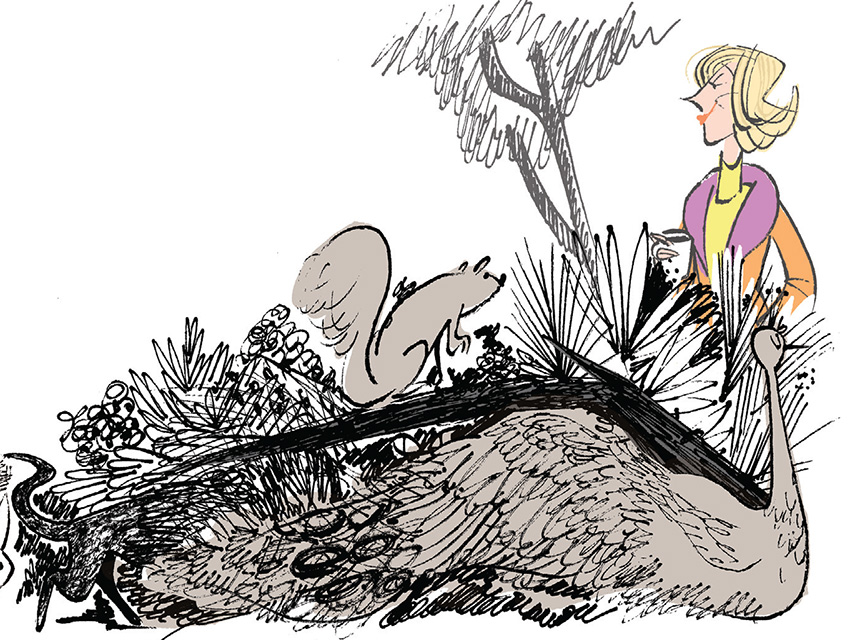 I live in the hills, so I expect wildlife encounters. Driving home recently from a fund-raiser that ran late, I watched a coyote sprint across a wide swath of Colorado Boulevard as I waited at a traffic light in Eagle Rock. A skunk once used my dining room as a shortcut to the backyard (he couldn’t resist making his mark on the way out). I had to rush my cat to the kitty emergency room after he tussled with a raccoon. Owls have swept overhead at dusk while I’ve been pruning rosemary, and I’ve spied hawks soaring to their nests in our giant pine, sometimes clenching in their talons the fluffy mice that will be dinner. We once had to hire a guy to relocate a possum family that had taken up residence in the crawl space, but I figured it was the price we had to pay for choosing a house so connected to its natural surroundings.

Living among wild things is one of the great joys—and complications— of being an Angeleno. I rarely listen to music or catch up on podcasts when working in the garden because I prefer eavesdropping on the chatter of the birds in the trees. When my son and I eat breakfast, we make a game of following the exploits of squirrels outside the window, who jump from fence rails to tree branches like tiny contestants on American Ninja Warrior. I didn’t think much about the stress wild animals experience until I stood in my driveway one afternoon and tracked a squirrel as it was being chased around a telephone pole by a hawk. “That must be so scary,” I said to the contractor standing beside me. “He has to live with that fear every day, ” he replied. Imagine never knowing if or when some menacing thing is going to snatch you up and send you to your death. For little creatures, it’s Sharknado out there. You’ve got to be sympathetic to how difficult we’ve made it for animals to thrive here. We cut down trees and put up billboards, only to place spikes on top of the signs to keep birds at bay; we slice mountains and canyons with freeways, leaving cats and dogs—big and small—no alternative but to bolt
across ten lanes of traffic to reach the other side.

My neighborhood is not home to any wild peafowl, but my friends’ street in Arcadia is. We went to their house for dinner last fall and collected gorgeous feathers from the front yard as the peacocks strutted their stuff on the roof. Across town, the Palos Verdes Peninsula is home to a thousand or so of the birds. In the magazine’s January issue Mike Kessler writes about how divisive their presence has proved. Some residents love them; others loathe them. The latter sentiment likely explains why so many peafowl have turned up dead in the past few years, a mystery Mike investigates. After reading his story, you may feel uncertain, as I do, about who rules the neighborhood: the birds or the people? They’ve both got game.