Home Uncategorized Lights in the Piazza 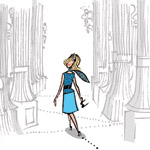 Twelve years ago, when I first began working at this magazine, the view of Wilshire Boulevard from our offices revealed a trickle of foot traffic and a Los Angeles County Museum of Art that was more glass-brick fortress than cultural nexus. Today those same windows look out on dozens of patrons buzzing around food trucks like hummingbirds do flowering sage, and on a thriving museum plaza that is becoming L.A.’s first real piazza.

How did this happen so quickly? There’s the pull of the museum’s two new exhibition spaces designed by Renzo Piano, of course, and the plaza restaurant, Ray’s (with its oh-so-civilized bar), and those Friday-night jazz fests. But I credit the art. More specifically, the contemporary art. For most of its history LACMA has strived to be an encyclopedic institution like New York’s Metropolitan Museum of Art (admittedly on a less grand scale), with pieces from as many centuries and parts of the world as possible. But in recent years two monumental outdoor works spurred LACMA’s civic transformation: Chris Burden’s Urban Light and Michael Heizer’s Levitated Mass. The 105-mile journey last year of the 340-ton boulder at the center of Heizer’s work transfixed the city as much as the space shuttle Endeavour’s trip to the California Science Center did seven months later (2012 was a big year for big stuff). As much as I admire the rock—walking through a deep trench beneath a 150-million-year-old megalith while clutching a shopping bag from the 99¢ Only store across the street has a way of grounding this city dweller—I have a deeper connection to Urban Light. Anyone who strolls by can’t help being engaged by Burden’s sculptural assemblage of 202 vintage streetlights that stand sentry on Wilshire. Through my sealed windows ten stories above I can hear the muffled laughter of schoolchildren zigzagging among the posts. Watching those bulbs illuminate en masse at twilight fills me with a serene joy.

L.A. is certainly in the midst of one of its art moments—and we’ve had a few. The magazine has previously written about Michael Govan (the director of LACMA who is reportedly considering a takeover of the beleaguered Museum of Contemporary Art), Ann Philbin (who as director of the Hammer has created a vital and surprising space), and Chris Burden (whose Urban Light was commissioned by Govan). In this issue we shift to lesser-known players with our guide to artists and galleries we think Angelenos should know. The work from the fine artists who live here should garner the same global attention as that of our filmmakers. Their sculptures and paintings can become symbols around which a city and its people not only cohere but kvell.