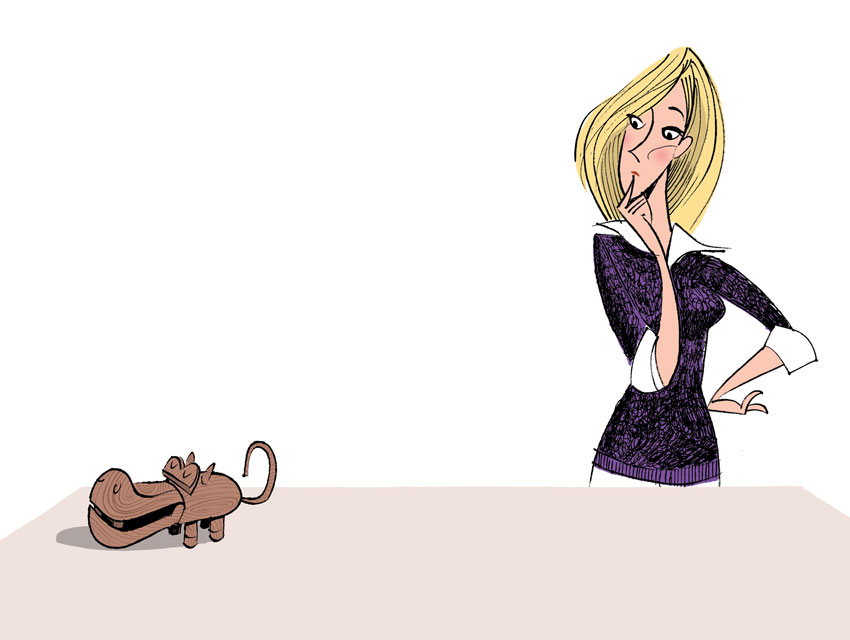 Anne Boleyn’s execution in Hilary Mantel’s Bring Up the Bodies is described with unforgettable imagery. The Vegas interlude in Donna Tartt’s The Goldfinch is so vivid, I was convinced I was living with the teenage friends Theo and Boris. Yet of all the memorable books I read last year, none had more effect on me than a slight volume written by a Japanese professional organizer.

Marie Kondo’s The Life-Changing Magic of Tidying Up has become an international best-seller. In the book Kondo outlines a plan for decluttering your home—and in so doing, your mind. Clothes, jewelry, books, kitchen tools, pieces of art: Take a good, hard look at every one of them, she says. Hold them in your hands and ask yourself, Does this spark joy in my heart? If it doesn’t, she recommends you thank it for its service and send it on its way.

I’m in the midst of “tidying up” my house using Kondo’s criteria. I find the “joy” question simple yet profound. My closet alone has yielded 20 bags of items that were thanked for their service. The result? Every piece of clothing I am keeping fits me and makes me feel good about myself. Imagine if everything in your life did the same. What about every person? (Fortunately for my husband, he still easily passes the test.) I’ve discovered that I was holding onto many items purely for sentimental reasons. They had fulfilled their function at a certain time in my life but were just occupying precious physical and mental space. That trinket from a flea market made me smile decades ago; now it’s just gathering dust. It’s time to let it make someone else smile. It’s OK to let it go.

I thought about Kondo’s book when I read Anne Taylor Fleming’s interview with a photographer who is documenting sofas dumped on the streets of Los Angeles. You see them on sidewalks across the city. The couches are a small obsession of mine as well—I found a midcentury beauty on 8th Street while driving to work one morning that now dominates my living room. I even once joked to Mayor Garcetti that I should become the Abandoned Sofa Czar of L.A. (He responded that I should be careful what I wish for.) But I know that each of those sofas has a story; as sad and deteriorated as they usually are, I wonder, Did they ever spark joy in a household? Were they thanked for their service before being kicked to the curb?

As a challenge, I asked my staff to take a look at the stuff they’d accumulated in their offices and discard an item or two. We’ve highlighted some of the gems here. Sure, I’ll miss the 10 Minute Solution: Butt Lift DVD that sat on editor-at-large Amy Wallace’s desk for two years. Fact is, its job here is done.

AGAVE SYRUP came in handy during the art department’s margarita night. With the tequila all gone, Carly Hebert isn’t feeling so sweet.

Amy Wallace’s tuchus is just fine, thank you, so stop sending her DVDs like the 10 MINUTE SOLUTION: BUTT LIFT. (Is there a 9-minute version?)

When in Kyoto, Matthew Segal quenches his thirst with POCARI SWEAT. In L.A. he prefers his drinks less, um, salty.

Time was, you could spy the DEVO ENERGY DOME on Steve Banks’s crown as he burned the midnight oil. He claims to have matured beyond such silliness.

Of all the deity figures Eric Mercado keeps on his desk, the ORANGE BUDDHA has given him the least luck. (Godzilla has provided the most.)

It’s nearly impossible to take a bad picture of LACMA’s URBAN LIGHT installation. But this snap of Marielle Wakim dressed up as the art piece on Halloween is just plain terrible.

The magazine’s former Aussie art director gave Nancy Miller this CLIP-ON KOALA BEAR to remember him by when he moved to New York. She likes the desk lamp he left her better.

What Happens After Marie Kondo Leaves?