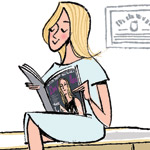 Two years ago I sat on an airplane and pondered the L.A. Woman. For the first time we were devoting an issue of the magazine to the subject. Maria Shriver would be on the cover, and I had a pile of story ideas from the staff to consider. I took out the grid paper I always use when planning a lineup and sketched an essay here, a photo portfolio there. One idea that didn’t make the cut was my own: to profile the women who keep me well—the dermatologist, the OB-GYN, the GI specialist, even the nutritionist. Through regular checkups and the occasional intervention, they help me stave off the stuff that could take me out.

Oh, and the breast doctor. I met her after a mammogram six years ago showed calcification clusters, not a lump, that could be an indication of something more serious. A surgical biopsy was recommended. I wanted a woman doctor to perform the procedure and asked my OB-GYN for names. She referred me to Dr. Kristi Funk, who was then at the breast center at Cedars-Sinai. “She’s your age,” my doctor said. “You’ll love her.” After my first visit, I didn’t just love Dr. Funk—I fell in love with her. She was smart and sunny and optimistic. I was an anxious patient, always have been, yet I believed her when she said we could tackle whatever came our way. She called me as soon as she got the pathology results late at night to say that it was not cancer, news she gave me again three years later when I had another scare. By then Dr. Funk had opened her own facility, the Pink Lotus Breast Center, and was making TV appearances as an advocate for women’s health. One evening I stumbled onto Gene Simmons Family Jewels, the reality show featuring the lead singer of KISS, and there was Dr. Funk performing a needle biopsy on Simmons’s wife, Shannon Tweed. I noticed the doctor’s growing presence with pride—she was on my team.

Then this past May came news of the procedure that reverberated around the world: Actress Angelina Jolie had written in The New York Times about being a carrier of BRCA1, a genetic mutation that greatly increased her chances of developing breast and ovarian cancer; as a result, she had undergone a double mastectomy. Who was her surgeon? Kristi Funk. The story sparked a hypercharged public conversation about breast cancer. Women who’d never heard of BRCA began asking their doctors if they should be tested. Others questioned whether a decision like Jolie’s was too radical. A significant discussion about women’s health was taking place, and Dr. Funk was at its center.

Funk is one of ten L.A. women we’re honoring in this issue as game changers in 2013. Each of their “lightbulb moments”—when they realized their calling—differs, but they all have the same faith in self and the dogged determination to make a difference.