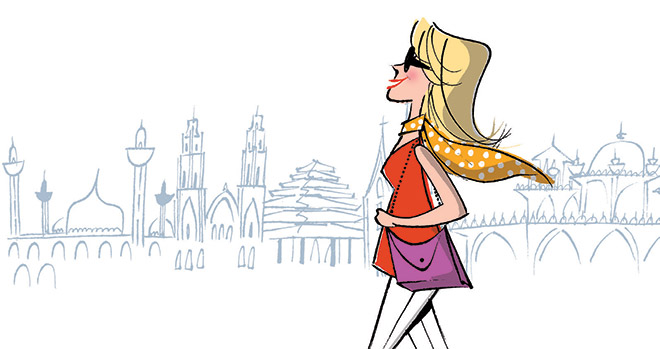 I attend the occasional Shabbat service and observe Jewish holidays at our local temple. I didn’t convert when I married, but it’s been important to me to raise my son in traditions that remain meaningful to my husband. Organized religion isn’t exactly in my DNA (which isn’t to say I’m not spiritual). For a couple of years in my early teens, I spent some Sundays at a Christian church with my aunt. My uncle had died, and she and I were close, so it comforted her that I went with her. I enjoyed the social aspect, much as I appreciate the wonderful friends I’ve met through our temple, but I’ve never bought into a divine plan. I don’t think that humans are easily categorizable into saints and sinners, either. Dogma doesn’t allow for gradation, and I am a fan of nuance.

In my house when I was growing up, holidays were joyous—and secular. My dad, a Texas Baptist by birth and an atheist by choice, called religion the root of every world problem; Mom, a “Hollywood Methodist” (her description), left the church once she aged out of Sunday school. She was open, however, to the alternative forms spirituality could take. She believed in believing—in ghosts and old souls, in life forces that could inhabit inanimate objects, in the power of positive prayer. I leaned toward her way of thinking because it sure was more comforting than Dad’s. “What about an afterlife?” I asked him one day while he was driving me to junior high. “We create our own heaven and hell right here on earth,” he said. I sat in geometry class that day, miserable in my braces and perm and awkwardness, mulling over our conversation. “So there’s nothing after this, Dad?” I’d questioned him. “Sorry, honey,” he replied. “This is it.”

Spirituality as a topic continues to fascinate me because it offers such a window into the diversity of our city. One of my first jobs in journalism was to contribute to an LA Weekly guide to churches and belief systems, which was like a crash course in world religions. I visited African American congregations with their own TV shows and Latino evangelical storefronts with folding chairs. I consulted with a channeler in Venice. I also heard a New Age leader speak in Santa Monica. Her name was Marianne Williamson, and she taught from a book called A Course in Miracles. She was clearly revered by her flock. Her mantras didn’t strike a chord with me, but for the past 20 years I’ve watched from afar her ascension to best-selling writer, Oprah guest, and now, congressional candidate. We profile her in this issue—she’s going after Representative Henry Waxman’s seat in the 33rd District. Williamson lacks political experience. What she does have is a bevy of boldface-name believers who like that she’s challenging the status quo. God only knows—or doesn’t—if voters will agree on June 3.