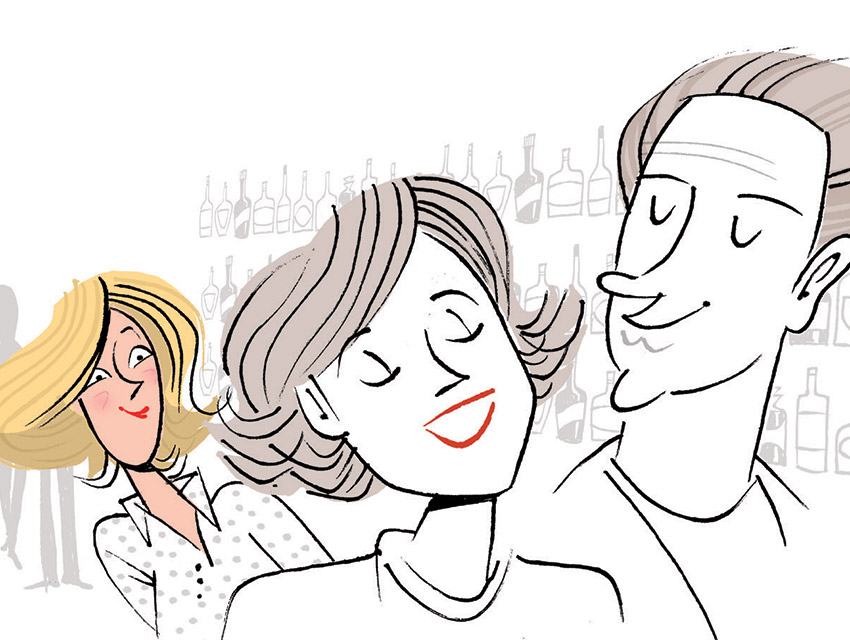 Every month in L.A. Story, we ask a celebrity to tell his or her own tale. In this issue we switched up the concept and devoted 43 pages to the accounts of unsung Angelenos, from pioneering immigrants to yoga gurus to the homeless. In lieu of our usual celebrity story, I invited the staff to share their favorite random encounters with fame here. Of the many I’ve had, few can top the time I ran into Warren Beatty and Annette Bening shopping for snacks in a seedy East Hollywood liquor store. They may not be unsung, but that night they looked like a couple of regular Angelenos to me.

Sweating It Out at the Supermarket
While checking out the fresh OJ at the West Hollywood Bristol Farms in 2004, I spotted this petite, fuzzy-headed man sashaying past me in a tank top and silky short shorts. It was Richard Simmons. He stopped, looked in my direction, and with a booming, sassy voice yelled, “Hey, giiiirl!” Then he continued power-stepping down the aisle. I said, “Hey!,” and quickly called my mom. Who else do you call when you have a Richard Simmons sighting? — Nancy Miller, deputy editor

Sundance Kid
Before the LAST presidential election, I Netflixed All the President’s Men to remind myself of how unseemly politics has always been. The next day I was in our office parking lot when I saw Robert Redford. I said to him, “It’s so weird, because I just rewatched All the President’s Men. It’s one of my all-time favorite movies.” He looked surprised and chuckled: “It is? I love that! Have a great night.” And he walked to his car with a grin and a wave. It was such a perfect exchange and made me love him all the more, even though he was wearing dad jeans. — Amy Feitelberg, photo editor

Lord of the Lactose
I was on the phone with my best friend while shopping at Whole Foods in 2010. I started to reach for a carton of milk when I noticed another hand reaching for the same carton. I realized the hand was attached to Orlando Bloom. I was so excited that I ran away, whisper-screaming to my friend that “I almost touched Legolas!” — Marielle Wakim, associate editor

Murray in a Hurry
In 1989, I had a summer job pumping gas at the Malibu Texaco, and Bill Murray rolled up in a white BMW convertible. He gave me an expired credit card. I declined it, and as he looked for a new one, I asked what he was listening to. “Atlantic Rhythm & Blues,” he said. “You like the blues?” Sure, I said. “Tell you what,” he said, handing me the tape. “I’ll get it in a couple weeks.” I still have it. — Matthew Segal, executive editor

So Metta
It was an autumn evening in 2011, and I was struggling in the bathroom. So was the man next to me. No matter which direction we moved our hands beneath the spigots of Fogo de Chão’s sinks (those fixtures without handles, knobs, or instructions), the water wouldn’t come out. It was a full 90 seconds before we looked at each other and shrugged in mutual hopelessness. Then I blurted, “Oh, my God, you’re Ron Artest!” (This was just before he changed his name to Metta World Peace.) And he said, “Yeah, man, these sinks are crazy confusing.” We both left without washing our hands. — Josh Scherer, associate editor

Dance Fever
Two year ago, when I was reporting on the Joffrey Ballet’s performance of The Rite of Spring, I happened to be seated next to Nigel Lythgoe from So You Think You Can Dance (his date was Priscilla Presley). I introduced myself, and throughout the evening he provided running commentary about the program. His reaction to the fertility ritual depicted in Rite? “Pocahontas on Ambien.” — Leilah Bernstein, associate editor

I’ll Admit It: I Liked Aloha