Home Uncategorized You No Longer Have to be Super, Super Wealthy to Afford an... 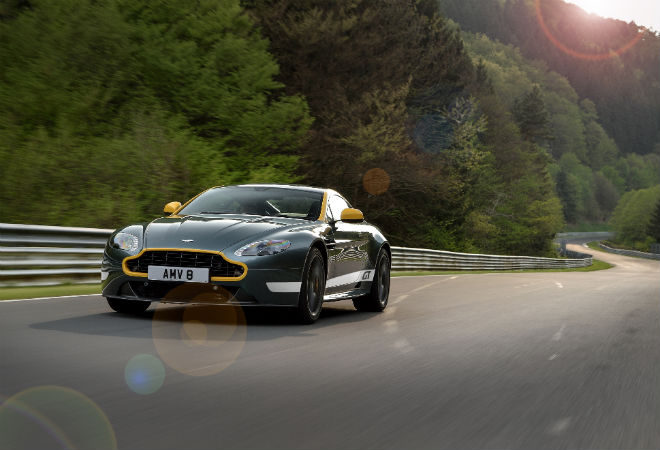 If you want to be like Bond, you drive an Aston Martin Vanquish. But if you’re not a government-funded spy, the top shelf Aston’s nearly $300,000 asking price becomes an impossible stretch for the average working stiff.

Luckily for Joe Six-Pack, Aston Martin builds a new bargain basement spinoff that comes in just under the six-figure mark. The Vantage GT, marked with a psychologically approachable $99,900 sticker, doesn’t pack the Vanquish’s mammoth V12 or ultra-sophisticated interior textures. But what the V8-powered GT lacks in outlandish details, it more than makes up for in driver-focused delights.

A weekend behind the wheel revealed a taut, visceral experience, with a manual gearbox and a good ol’ fashioned hydraulic steering system (versus a numb-feeling electric unit) delivering decidedly focused feedback. Handling is sharp, and the form-fitting seats convey an honest interpretation of the road surfaces below. Decked out in Aston’s traditional Alloro Green with striking canary yellow accents, our borrowed sled turned enough heads to make it sub-optimal transportation for discreet espionage. The 430 horsepower engine’s snarl was similarly conspicuous, along with the fact that we had to row-row-row our gears the old fashioned way with a purist-pleasing manual transmission. Non-Luddites can breath easy: a 7-speed paddle shifter setup is also available. The two-wheeled analog to the workaday Aston Martin is the Ducati 899 Panigale. Like the V8 GT, the lil’ Duc lives in the shadow of its big brother, the 1199 Panigale. Also like the baby Aston, the 899 can be had for thousands less than its pricier stable mate—in this case, a full 20 percent cheaper than the full-blown superbike. Though its 148 horsepower engine doesn’t pack quite the same gut-blowing punch as the 1199, the 899 nonetheless manages to thrill with its sexy bodywork, lightweight construction, and bad boy road presence—all for $14,995, around the cost of a used economy car. It also happens to be loaded with a ton of technology, from traction control to adjustable engine braking, which makes it a rare bird that combines right-brain emotion with left-brain reason. Oh, and it sounds like a banshee from hell when accelerating under full throttle (which, we assure you, is a good thing).

For somewhat budget-minded buyers with champagne wishes and caviar dreams, these two (relatively) right-priced rides offer refreshing takes on glamorous urban transportation. Though they’re still premium-priced luxury items, their cut-rate price tags and potent curb appeal make them viable alternatives for those willing to spend a few extra bucks in order to leapfrog the middle of the bell curve.