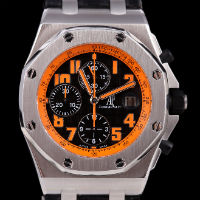 Eleven James was founded by NetJets and Marquis Jets alum Randy Brandoff with the goal of satisfying commitment-phobic horological nuts. The premise is simple, think Netflix for watches: pick your favorite selections from their online catalogue, receive a timepiece via FedEx (or an Eleven James courier if you live in New York City), and savor the wrist candy for several weeks at a time before rotating to the next watch.

Because many watch fanatics also happen to be car nuts, we couldn’t resist curating our optimal watch/car pairing using Eleven James’s timepiece stock as a starting point. After all, why wear a watch that costs as much as a car without having the commensurate wheels?

In an ideal world, here’s what we’d drive while wearing our Eleven James loaners: For those who have a taste for the outdoors tempered with civility, and that are likely to spend leisure time climbing Everest (with a full support team), roaming the Serengeti (in an air-conditioned Eurocopter), or traversing the Rubicon Trail (with a 5-star hotel as your final destination), you can’t do without a Rolex GMT or a Land Rover Range Rover Sport.

The Rolex GMT Master was designed in cooperation with the late, great Pan Am Airlines to help globetrotting gentlemen keep track of time zone changes circa the “Mad Men” era. Embracing a similar aesthetic, Land Rover’s Range Rover has paired surprisingly robust offroad capabilities with posh interiors for the better part of four decades. Combine the two, and boom!—you’ve successfully forged a winning combination of outdoorsy cool and buttoned-down prep. Like a well-tailored Paul Smith suit with an obnoxiously loud interior liner, you’re generally well mannered … until that pesky wild side sneaks out after one too many single malt scotches.

The Audemars Piguet Royal Oak’s signature octagonal bezel and hexagonal screws suggests well-honed style, as it’s been spotted on the wrists of Patrick Dempsey and Jay-Z. McLarens are in-the-know supercars favored by bona fide car nuts like Jay Leno and Rowan Atkinson, and are renowned for their race-derived functionality (and papaya-hued paint jobs). Together, these volcano-colored numbers make a dynamic duo of mechanical wonderment. Combining Swiss movements with swanky, chunky cases, Panerai served as the official watch supplier to the Italian Navy for nearly six decades. Their wristwatch lineup has managed to consistently merge function with style, making them appealing to a subset of guys with bold taste and ballsy automotive leanings.

The perfect philosophical analog to the blacked-out PAM 441 is the new Lamborghini Huracan, a V10-powered Italian supercar that has enjoyed a windfall of technological benefits from having Audi as a corporate parent, including a slick-shifting dual-clutch transmission and electronically adjustable suspension. Together, these half-Italian mutts prove that head-turning looks and honest-to-goodness functionality can, indeed, live in the same body. Patek Philippes are the Swiss Bankers of the watch world, offering elegant discretion in a world of braggadocio and blabbermouths; if you speak in hushed tones and sit on steep piles of dough, there’s a good chance you’re a Patek fan. As such, the magnificently understated Mercedes-Benz S-Class Coupe makes a harmonious partner to this exquisitely finished timepiece, matching its handcrafted details to a tee.

With its rakish stance and opulent interior, the S-Class Coupe is the ride of choice for captains of industry who wouldn’t be caught dead in a Lamborghini. For that reason alone, we couldn’t imagine a better match for this high-dollar Benz than the equally tony, leather-banded Calatrava.