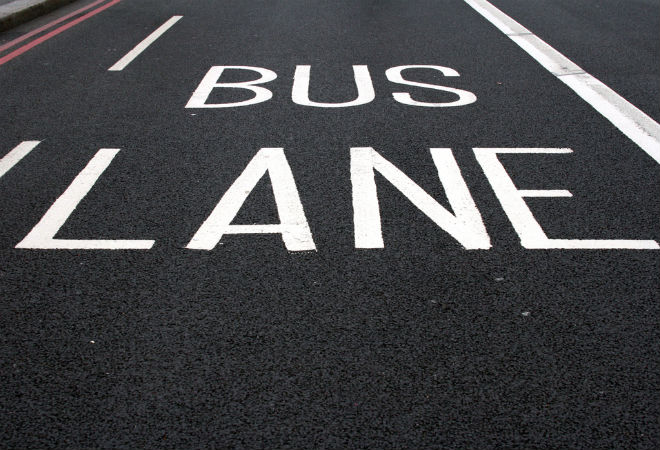 Scheduled to wrap at the end of the year, the $31.5 million project will turn 7.7 miles of Wilshire Boulevard into bus-only lanes during rush hour; the only time cars will be able to get near them is during off-peak hours and when they’re making a right. After a portion of the lane was finished in Koreatown last June, the project has already impacted the commute by saving bus riders a good chunk of time. The finished project is expected to cause a 24 percent reduction in cross-town commutes (about 11-12 minutes), and will discourage auto use on the city’s main artery. Wilshire currently carries more daily bus riders, 53,000, than any other street in L.A.; a number actually higher than the amount of solo drivers who traverse its rutted surface.

While some drivers may grumble about losing a lane, they will see some relief when it comes to the actual comfort of their commute, with 9.9 miles of street, signal, and signage improvements. Part of the work includes a resurfacing of Wilshire from the edge of downtown to the Santa Monica border. Why not all the way to the beach? Well, not everyone is such a fan of the project.

Some residents of the high-rise, celeb-heavy L.A. neighborhood sandwiched between Beverly Hills and Westwood said the bus lanes would keep them prisoners of their homes, with bus activity blocking the exits to their parking garages (as opposed to speeding or idling cars?). Right or not, the NIMBs (not in my boulevard) received the support of County Supervisor and Metro board member Zev Yaroslavsky, who said the bus lane would aggravate traffic and provide little relief to transit-riders.

The complications by Santa Monica, Beverly Hills, and Condo Canyon illustrate the complexity of building any large infrastructure project in Los Angeles, even one as seemingly simple as a bus lane. While different municipalities have their own desires and demands, the tangled web of bureaucracy did no favors in expediting the BRT project, which has been in the works for nearly four years. According to an LADOT representative, quoted in Streetsblog, “The schedule for the Wilshire bus lane project involves multiple City departments that work on the design, construction of the street widening, pavement reconstruction, engineering surveys, analysis and traffic management plan… That said, LADOT is working with our partners to expedite this project and will continue to push ahead to make Wilshire bus lanes a reality as soon as possible.” “As soon as possible” is relative: that quote is two and a half years old.