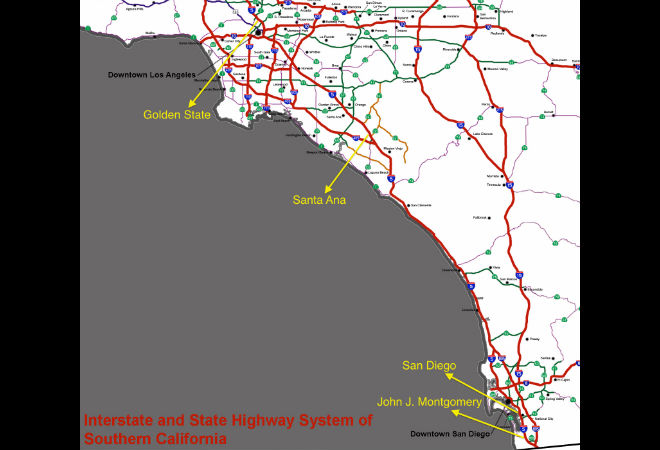 The common practice of aspirational Angelenos inventing multi-hyphenate titles for themselves (“I’m a singer-director-actor-fire-breather!”) extends beyond our careers. We do the same with our freeways, slapping epithets upon them to either memorialize historical figures or honor state or civic locales.

Take the John J. Montgomery-San Diego-Santa Ana-Golden State Freeway, for example. It’s the 5. Beginning at the United States-Mexico border, it is known as the John J. Montgomery Freeway. Traveling through downtown San Diego, it parallels the Pacific coastline, passing the I-805 merge (where it becomes the widest interstate in the United States, with 14 southbound lanes and 13 northbound lanes, for a short stretch), before passing through the Marine Corps Base Camp Pendleton in northern San Diego County. Here, it takes on the name the San Diego Freeway until it becomes the Santa Ana Freeway as it runs through Orange and Southern Los Angeles counties. When the freeway reaches the East Los Angeles Interchange one mile east of downtown Los Angeles, it takes on its most romantic of its names: the Golden State Freeway.

The Santa Monica Freeway, Rosa Parks Freeway, San Bernardino Freeway, the Redlands Freeway and the Christopher Columbus Transcontinental Highway are all designations for the 10. Called the Santa Monica Freeway from Route 1 at the Pacific Ocean to Route 5 east of downtown, it was thus named by the State Highway Commission on April 25, 1957. However, here, at is western-most point, it is also designated by a sign as the Christopher Columbus Transcontinental Highway. The section between the Harbor and San Diego freeways is known as the Rosa Parks Freeway from Route 110 to Route 405, as named in 2002. When it intersects the Harbor Freeway, it gives way to the moniker San Bernardino until it becomes the Redlands Freeway. At the Route 111 cutoff, a sign announces it as the Sonny Bono Memorial Freeway.

The 405 used to be known as the Sepulveda Freeway, named after Sepulveda Boulevard, which was named after the prominent Sepúlveda family who played a significant role in the Spanish-Mexican period of California history. Now the freeway is known as the San Diego Freeway, until it hits San Diego, where the 5 takes on the name. Opened in 1962, it quickly became overwhelmed with traffic, a problem that eventually led to the current $1-billion widening project. It may soon be time for a name change. The Carmageddon Freeway, Jamzilla Freeway, and the Four-Oh-Five are all commonly-used monikers. How long until one of them becomes official is anyone’s guess.

Find out more about our roads’ romantic alter-egos here.