Home Uncategorized What A Concept: Cars Made of Hemp, Powered by Air 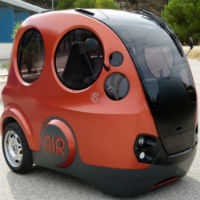 With the Tesla, the Chevy Volt, the Nissan Leaf, and of course, the Prius, eco-friendly cars have found their place in the spotlight. Hopefully this trend will last longer than 15 minutes, especially considering how long it’s been coming. The first car manufactured in an eco-friendly manner was supposedly prototyped by Henry Ford in 1941, with a plastic composite of organic materials including hemp. That was over 70 years ago. If they ever make it to market, these are a few vehicles that might actually save the world: In 2008, automaker Lotus took a new approach to the “green” car with the announcement of its Eco Elise. Featuring a body made of hemp and other renewable materials, Lotus overhauled its entire manufacturing process to reduce energy and water usage, boost recycling, use locally-sourced, renewable and carbon-neutral materials, and provide dash instrumentation to encourage greener driving habits.

Its body panels and trim are comprised of sustainable materials hemp, eco wool and sisal and painted with hi-tech water based paint solutions. A green gear change display in the dashboard promotes greener driving. In attempting to build a green car, Lotus looked beyond emissions, analyzing energy consumed during manufacture, and in the post-life of the vehicle, bringing the three R’s – Reduce, Reuse, Recyle – to the forefront of the automobile industry. The Eco Elise was not the first hemp-based car to come into existence.  The Kestrel, a three-door hatchback made of a hemp-composite was teased to be hitting the market in 2010. The design of the 4-passenger compact debuted at the 2010 VE Electric Vehicles Conference and Trade Show in Vancouver. Motive, the Canadian based transportation design and manufacturing firm, expected to have a production prototype available by late 2010, but little has heard of it outside of pro-cannabis websites. With a projected top speed of 90 km per hour and a range of approximately 100 miles before needing to be recharged, the Kestrel EV would have had a major impact on the green car industry. What could be more green than air? Tata, an Indian carmaker has constructed a prototype air-powered car called the Airpod. Powered by compressed air, the bubbly little vehicle logs a speed of 50mph and can travel up to 125 miles before needing to be recharged. The tank holds about 175 liters of compressed air and can be filled at home, at special stations, or by sucking air in from the outside. With virtually zero emissions, the Airpod allows for truly guilt-free driving. Currently in its second phase of testing, Tata expects to release the Airpod commercially in the near future for around $10,000. The Phoenix is a biodegradable car made of bamboo, rattan, steel and nylon. How boho chic! So far unveiled in concept only, the Phoenix was created by product designers Kenneth Cobonpue and Albrecht Birkner. Its biodegradable skin is designed to last the average length of time a person keeps a car (5 – 20 years). Once it begins to degrade, the skin can be replaced if the owner wishes to keep the car longer. Should this car ever become available in physical form, it could help do away with scrapyards, freeing up all that space for oh, say, public parks?