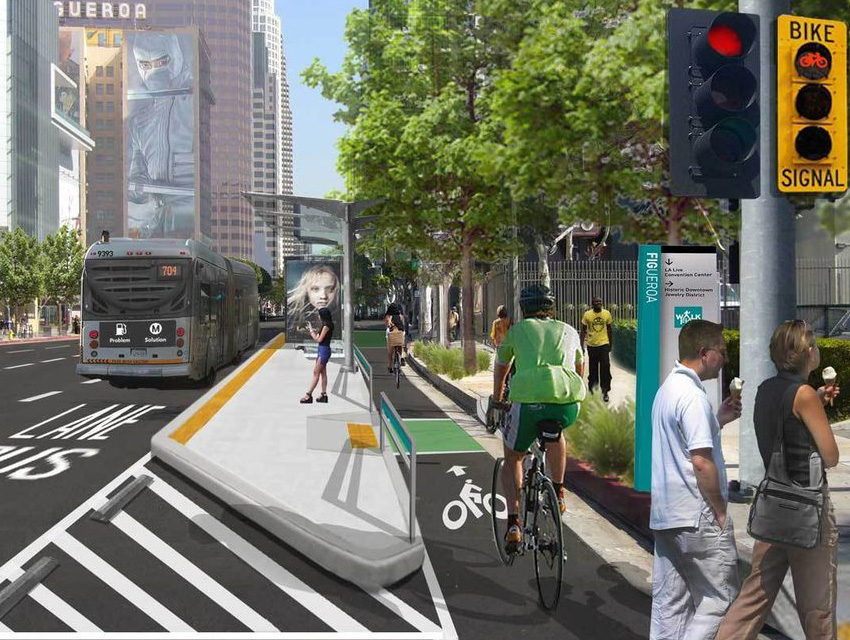 Figueroa Street stretches for over 30 miles of Los Angeles County, most notably through the entertainment and financial districts of downtown L.A. For much of its length, it’s a drab thoroughfare; a functional north-south conduit. But the MyFigueroa plan will transform four miles of Fig (as it’s often called) into a more complete street, one that accommodates cars, bikes, and pedestrians—that is once the pokey plan ever reaches fruition.

The project will add better crosswalks, wider sidewalks, fancy bus stops with public art, improved signage, new trees and plantings, and bike lanes buffered from vehicular traffic, all while maintaining two north-south car lanes, a turn lane, and a bus-only lane in certain segments. State funding originally mandated that construction begin in January 2014 and wrap in less than a year; by December 2014. Thanks to a lawsuit from the owner of several car dealerships on the street, that deadline was not met. An extension was granted, the lawsuit eventually settled, and a new deadline for completion given: December 2016.

It’s not clear what’s to blame for the latest delay—now major construction won’t begin until January—but the changes cannot come fast enough. The project will better connect DTLA to Exposition Park, USC, and South LA. It also includes additions, like bike lanes and repaved roads, to adjacent streets like Martin Luther King Jr. Boulevard and 11th Street, the latter of which is blowing up with new projects.

Even though major work won’t even occur this year, one humble addition has already come to Fig: new streetlights.