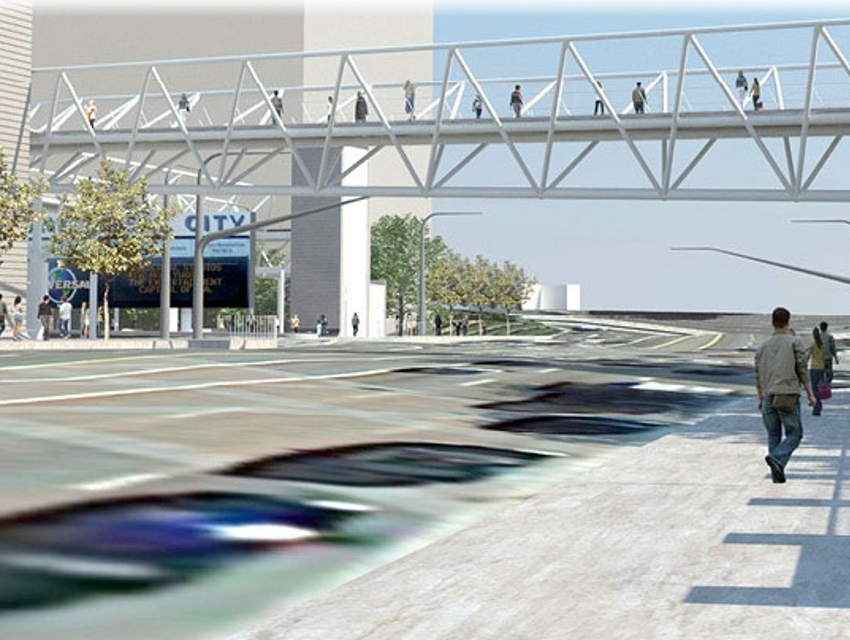 Lots of big changes are coming to Universal City in April. Most anticipated is the Wizarding World of Harry Potter, the-amusement park-within-an-amusement-park at Universal Studios Hollywood. The project, which replaced the Gibson Amphitheater, opens April 7. Meanwhile, a new report from Metro indicates their controversial pedestrian bridge at the Universal City Red Line station will open at the same time.

While projects like the Regional Connector light rail line and the Purple Line subway extension encounter construction delays and NIMBY lawsuits, the Universal City pedestrian bridge is on track and ready to open around the same time as the Harry Potter attraction. Rios Clementi Hale designed the span, which is intended to “ease the flow of pedestrian traffic to and from transit amenities and Universal Studios Hollywood, and will also mitigate impact on vehicular traffic,” according to the architect.

With less pedestrians crossing Campo de Cahuenga and Lankershim Boulevard, car traffic could ease up a bit. The rub is that the design could encourage vehicles to race through the intersection, which will still allow pedestrian crossings at certain points. Some have argued the bridge is actually an inconvenience to pedestrians and is simply a way to move cars faster through the area (Metro would disagree with the first point).

The J-shaped bridge spans one side of Lankershim and Universal Hollywood Drive, connecting the subway entrance at the northwest of the intersection with the Universal Studios shuttle at the southeast corner. Transit riders will be able to ascend to the bridge from the subway platform and make their way to the shuttle without dealing with cars. The bridge’s elevators and escalators will be covered so they don’t get slick from rain, while the bridge itself will be open-air but enclosed with a wire mesh for safety and transparency. Landscaped plazas will decorate each end of the bridge and “focus on providing access to the bridge and will also serve to create a barrier to the street.”