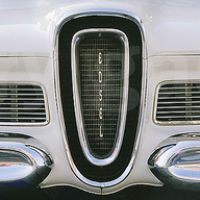 The Edsel debuted on September 4, 1957, an event that had been so hyped by Ford’s marketing efforts that it came to be known as “E Day.” After a long and aggressive publicity campaign that had consumer’s hopes hanging high, the car was finally greeted with resounding groans of disappointment. Designed according to exhaustive market research and development, Ford claimed that the car’s styling and specifications were superior to Oldsmobile and Buick, and the company was certain that the Edsel would sell impressively. But what they unveiled resembled not a sleek, modern “entirely new kind of car,” but an awkward appliance on wheels. It was also expensive, gas hungry, and too closely resembled other cars. In fact, it shared its bodywork with other Ford models. The marketing campaign had been full of lies.

What really did the car in, though, were its laughable design flaws. The Teletouch pushbutton automatic transmission selector, one of the Edsel’s “innovative design features” (intended to make driving so easy anyone could do it – even women, according to the 1957 commerical below) was complex and poorly placed. The pushbuttons were located on the steering wheel hub where traditionally the horn button belonged, which led, predictably, to some erroneous gear shifting when drivers intended to honk the horn.

The taillights of the 1958-model Edsel station wagons also caused confusion on the roads. The boomerang-shaped lenses were placed pointing inward, making them appear, when the signals flashed, to be pointing in the opposite direction of the turn being made. The design element that created the biggest popular backlash was the vertical grill, to which critics loved pointing out its resemblance to a vulva. Intended to be model’s distinctive trademark, it became known as the “toilet seat grille.” It certainly did not help establish the Edsel’s distinctiveness; rather, a popular joke sprung up, originating in Time magazine, that the Edsel looked like “an Oldsmobile sucking a lemon.” In its first year, sales landed below expectations, though not at total flop levels. The four models produced that year were Citation and Corsair (based on the Mercury), and the smaller Pacer and Ranger (based on the Ford), and included sedan, hardtop, convertible and station wagon models.

In 1959 only two series were offered: the Ford-based Ranger and Corsair. The Mercury-based Edsels were discontinued. The next year, 1960, would be Edsel’s last. The only model offered was the Ranger series, including a sedan, a hardtop, a convertible and a station wagon.

After three years of production, the Edsel was finally laid to rest when Ford President Robert McNamara slashed the marketing budget and finally convinced the rest of the management team to eliminate the money-suck. The Ford Motor Company lost millions of dollars on the car’s development, manufacturing and marketing—all of which had been its pre-introduction selling points. Thereafter, the word Edsel took on a specific meaning in the automobile lexicon: “failure.”