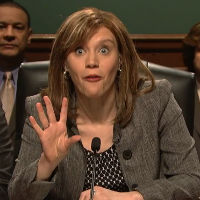 Jon Stewart on The Daily Show, reporting the history of GM’s investigation of faulty ignitions – a problem that would have cost 57 cents to fix: “They studied the problem for four years …  did an internal cost-benefit analysis … using your standard, analytic, algorithm, barometric PE ratio equations and came up with … ‘F**K It.”

His solution for the company: “Even if you’re strapped for cash, GM, you could have found at least that much in the seats of the cars you’re fixing!”

Kate McKinnon playing a clueless General Motor President, Mary Barra, on Saturday Night Live: “I am looking into knowing when I first knew about it but I won’t know the results of that knowing until I know for sure.”

Another zinger: “The first rule of new GM is you never talk about old GM.”

Lee Terry, Republican Congressman, after arriving late to a GM hearing in Omaha, Nebraska: “I’m sorry for being late, but my plane was canceled for mechanical reasons. Probably an ignition switch.”